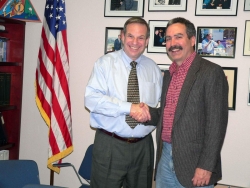 Filner added, "When they have one of their employees wounded or killed, you should see what they do to the parents. They don't give them any information. They lock them out of any knowledge. This is not a good company.”

Blackwater’s notoriety includes the massacre of 17 civilians in Iraq by Blackwater employees, the FBI found. In another now-infamous incident, four Blackwater employees were ambushed and hanged off a bridge in Baghdad, triggering the siege of Fallujah. Relatives of the slain employees have sued Blackwater, alleging the company failed to provide essential protections for its workers.

The contract with Southwestern College, first disclosed in January 2009, originally included provisions that compensated Blackwater for staff time and allowed Blackwater to use SWC on-campus conference rooms for any purpose and for an unlimited period of time. It also included a “gag-order” in which the board could not say anything about the agreement to the public without the prior written approval of Blackwater, Citizens Oversight Projects (COPS), a watchdog group, revealed. Nine changes were made to the agreement after these issues were brought to light through a written complaint by COPs , eliminating what the group argued were the most egregious provisions. However, the college continued to use the Otay Mesa facility despite other facilities being available. COPS expressed concern that Blackwater could use the college campus to recruit students for mercenary activities.

“I went to every shooting range in the county and gave them a list of alternatives,” Veronica Lavarello, a Stop Blackwater activist, said. “There were several options that were not considered by the college, and those were free or almost free to use.”

“Blackwater's goal was to sanitize their soiled reputation by changing their name to Xe-Systems LLC and partnering with the College,” said Ray Lutz, coordinator of COPs. “They wanted students to come to their facility and see how glamorous a life as a mercenary could be, the free use of the facility serving as a way to advertise their own training programs and perhaps convince the students to give up a career as a police officer or Sheriffs deputy and instead pursue a career path as a mercenary soldier war profiteer.”

Opponents of the agreement from around the county attended every meeting of the college board since January 2009 adamantly requesting that the contract be canceled, videotaped the meetings, and protested outside, sometimes interrupting the meeting with the chants to “Stop Blackwater.”

The cancellation was approved by the board just after the two-year anniversary of the Nisour Square massacre, where on September 16, 2007, Blackwater contractors killed 17 innocent civilians and injured scores more in a 30-minute shooting spree in Baghdad. An investigation by the FBI eventually held five Blackwater contractors responsible for the killings, but stated that Blackwater Worldwide had no responsibility whatsoever, even though the contractors were trained by Blackwater.

Early in 2009, Blackwater changed its name to “Xe Systems, LLC”, pronounced “Zee,” and the first draft of the agreement with Southwestern College still included the name Blackwater.

“I hope people will see through their public relations game and continue to recognize a problem when they see it,” Lutz said.

Action on the agreement includes a contractually specified four-month delay, although there is no penalty for the college to discontinue use of the facility immediately and use other shooting ranges, such as the range in Miramar which is run by the San Diego County Sheriff's Department.

In March, 2008, Blackwater pulled the plug on controversial plans to develop an 824-acre private military training facility in Potrero, a tiny hamlet in east San Diego County, about an hour from San Diego. That move followed intense resistance by the Potrero community that drew international media attention, including the recall of five pro-Blackwater members of the Potrero Community Planning Group. Citizens replaced those planners with members who eventually voted against the project. Blackwater stated that it withdrew its plans for Potrero due to the inability to meet County noise requirements.

A month later, COPs learned of a secret facility developed by Blackwater under pseudonyms “Raven Development” and “Southwest Law Enforcement” in Otay Mesa. The City of San Diego refused to issue occupancy permits when City Planners learned of the true extent of the 66,000 square foot facility, but Blackwater took the city to federal court, where Judge Marilyn Huff, a George H. W. Bush appointee, ruled in favor of Blackwater, thereby forcing the city to accept the warfare training facility without discretionary review. This Otay Mesa facility was the subject of the agreement with Southwestern College.

Southwestern College District serves 18,000 students annually and is located in the extreme south-west corner of the continental United States between the City of San Diego and the U.S.-Mexico international border.