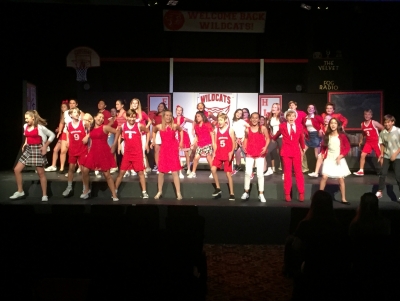 July 28, 2017 (Spring Valley) - Beat the heat this summer by introducing or reintroducing your kids and or yourself to youth theatre. You have several choices over the next few weeks and you will probably surprise yourself how much you enjoy the show and at the very least, you will cool off for a couple of hours.

First off, we have Young Actor's Theatre's High School Musical from July 20 - 30, 2017, performed at Encore theatre in Casa De Oro. YAT we also be doing Legally Blonde The Musical at Lyceum, in Horton Plaza, from August 3 - 13, 2017. Then we have the Classic Treasure Island, modernized with Hip Hop dance, at Grossmont Stage House Theatre July 27 thru August 3. 2017. Also, Pippin at San Diego Junior Thestre, performing st Casa De Prado. playing July 28 thru August 13 , 2017. Check out the websites for more information. Then pick a show. These are just a few, but if the show sounds like one you would enjoy you probably will.

High School Musical is directed by Mackenzie Plumb, her debut effort with YAT. She's off to a great start. This was the most enthused applause from an audience after a show I've heard in a long time. They love the show. Entertaining, fun and full of high octane energy. The finale alone where they re-sang a part of all the songs from the show and danced for at least ten minutes straight keeping up the pace and energy level you might find in a opening quite impressive. These are kids in the second through eighth grade in this one. An inspiration to all kids watching. 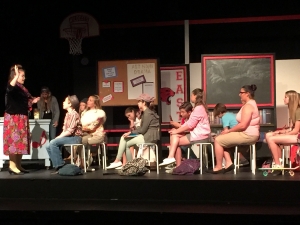 All these youth venues offer camps to learn signing, dancing and acting. If your kids want to act, I recommend you find them a spot. Especially boys, then need boys. It may not be your first choice, but think about it. Everyone is like family and it's a great environment.

High School Musical is the story of Gabriella, the new girl who moves to East High after winter break. On winter break she has met Troy. Now she is at his school. When you see the opening, you think Grease. But it's not. The message is this updated high school story is be who you want to be. You don't have to remain pinned into a hole where others have placed you.

Mia Jative played Gabriella, with her beautiful voice commanding the stage. Damon Ojeda, fresh from playing Cinderella's Prince in Into The Woods, played the good looking All American basketball hero Troy.  Ellison Wavra played the villainess Sharpay to perfection. Her twin brother Ryan was played by the always lovable Levi Laddon. Other standouts, Nicholas Haney who made the radio announcements was great. Jack Gardener made a cool Chad. Jaxson Ray very mature as the coach. Leksi Waring as the drama teacher was fabulous and for me, she was the star of this one. 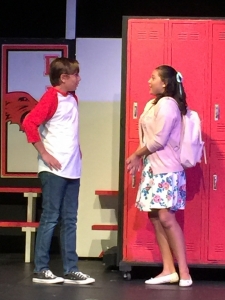 Spend an afternoon or evening in a theatre soon.