“Stay the course to your dreams.” – Sam Mejia Sparrow 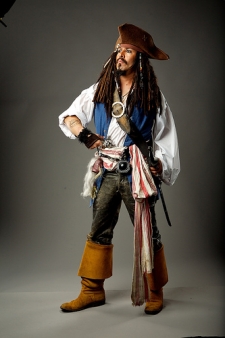 Story and inside photos by Miriam Raftery

August 25, 2009 (San Diego’s East County) – “I was a rebel growing up,” recalls Sam Mejia, a.k.a. Sam Sparrow, who spent his childhood in Spring Valley, Rancho San Diego and Bonita. He later traveled to Florida before returning home and finding his true calling as a celebrity impersonator who bears an uncanny resemblance to Johnny Depp, star of the Pirates of the Caribbean movies.

A former investigator who once aspired to a Miami Vice lifestyle in Florida, he gained an insider’s perspective on corporate piracy and helped put scoundrels behind bars. Now he makes his living providing lively motivational business presentations and entertaining guests at private parties. Despite his charming rogue’s demeanor, however, this pirate has a heart of gold ---devoting countless hours raising funds for charities.

“My Mom always wanted me to be a Sunday school teacher,” says Sparrow, who adopted his stage name in honor of the Captain Jack Sparrow character portrayed by Depp. “I think that was the main culprit behind me turning pirate,” he quips. Then his tone grows serious. “Now I’m doing God’s work in a weird way. I donate a lot to charities, especially children’s charities, and I try to inspire other celebrity look-alikes to do the same.”

He recently commandeered an El Cajon City Council meeting at the Mayor’s invitation to rally donations to save the Mother Goose Parade. Donations poured in as a result, though more is needed, Sparrow is quick to add. “There are children breaking their piggy banks open. If everyone would donate even a dollar, we could save the parade.” 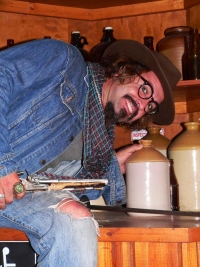 He delights in using his infamy at charity auctions to coax, scold or cajole guests into sparing him from the gallows and donating to a good cause. “I am blessed and thank God everyday because I get to give so much to charity,” notes Sparrow, who earns a good living but finds his greatest riches in helping others.

Sparrow is his own walking billboard, roaming around East County dressed in pirate-casual garb even on his days off. (photo: Sparrow at Hooleys) Dual beard braids and a sparrow tattoo on his forearm enhance his resemblance to Captain Jack Sparrow, the character made famous by Depp. The tattoo resembles a brand, since brands were once seared onto pirates caught pillaging in days of yore.

His ability to tug at the heart-strings, combined with his natural comedic talents, began at an early age. “As a kid, this came in handy in the principal’s office,” the modern-day scalliwag confesses.

By age 11, he aspired to emulate Sonny Crockett of the Miami Vice TV show. “I would dress like him, no socks, slip on leather shoes, and flash a badge,” he recalls. “Life has a strange way of coming true.” After putting himself through police academy at Southwest College, he got a job as an investigator for a risk management and loss prevention company investigating “employers and consumers with nefarious intentions.” He worked with the Secret Service and local law enforcement officials to put the organizer of a major credit card crime ring behind bars. But the best part for Sparrow was the lifestyle. “I got to drive around Miami in an open-top vehicle flashing my badge, driving on the same beach as Sonny Crockett and living my dream.”

He also studied theater arts before his art of mimicry led him to begin holding corporate motivational seminars that were, to say the least, unconventional. He coaxed one corporate client into allowing him to hold a seminar outdoors in a tropical park, where he dressed up as TV Croc Hunter Steve Irwin and wrestled a life-sized stuffed crocodile symbolizing corporate losses. “I jumped on the replica and shouted, “I need help!” he says, flashing a mischievous grin. “Others jumped on the snout and tail. Then my partner splashed water in my face….They all laughed and I got a standing ovation.”

Afterwards, a senior vice president told Sparrow he was in the wrong line of work. “I said, `You’re firing me?’” Sparrow recalls. “Then he told me, `You’re wasting your talents here. You need to go find your true calling….You need tod follow your dream.’” 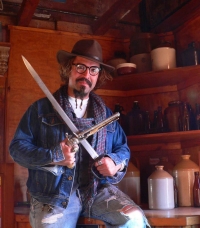 Sparrow headed home to Rancho San Diego, where fortune led him to Hooleys Irish Pub & Grill. (photo, left) By this time, Pirates of the Caribbean was a box office success and Sparrow was regularly being stopped by strangers who commented on his uncanny resemblance to Johnny Depp.

“It all started here in Hooleys,” says Sparrow, who offered his look-alike services to pub owner Craig McDonald for a Celebrity Waiters Night benefit at Hooleys. KUSI TV aired footage of his Depp impersonation. “It exploded overnight,” recalls the professional pirate, who soon began booking appearances at everything from weddings to parties to corporate events. “Craig has been very instrumental in introducing me to the right people at the right time. I began meeting politicians, charity leaders, board of directors members…I owe Craig a lot, and I owe this pub a lot.”

Indeed, Sparrow relishes spending time in his “office” – a corner booth at Hooleys in Rancho San Diego, where he holds court with clients and reporters. Hooleys has even named a drink in his honor—Captain Sam Sparrow, a concoction of white rum on the rocks, V-8 mango splash and dark rum. 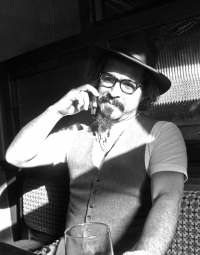 “I’m an old soul,” he muses, noting that he feels at home amid the pub’s authentic Old World décor—which was all imported from Ireland, right down to the old church pews that double as benches. He leaps onto a shelf and perches amid rum bottles, brandishing a sword and pistol.

“I get away with murder onstage,” Sparrow chuckles. “At charities, I can challenge people to give more. At corporate events, I’ve made ‘em blush and laugh at the same time. I’ll say, `It’s no secret that some of you board members are more pirate-like than I will ever be.”

Escorted onto a corporate vessel by a quartet of “lovely wenches,” Sparrow accepted a bottle of rum (his favored vice) and promptly began bellowing orders to wealthy corporate executives: “On eck, you scaberous dogs! Hands to braces!” All scrambled to obey, shouting “Aye, Captain!” he reports, clearly relishing the memory. Sparrow further motivated corporate executives and employees to “pull together as a crew” and “look to your Captain to lead this cruise.” 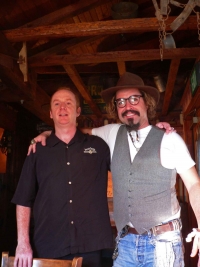 At Hooleys new pub in La Mesa, he onced showed up to emcee an event with a group of Navy members whom he’d invited spontaneously from an earlier event at a Naval event at the marina. Sparrow, as Captain Jack, toasted the “brave young men,” who drew a standing ovation. “Their faces were priceless; they were smiling from ear to ear.”

Another memorable moment came when a party guest asked if he had powers to marry a couple. Sparrow, who is an ordained clergy member as well as portraying a pirate captain, startled the guests by obliging.

“I gave my sword to the bride and had her point to the gentleman’s crown jewels,” he says, eyes twinkling. “Everyone laughed. Then to even the odds, I gave him a pirate pistol.” Ad libbing further, he summoned a bouquet of shot glasses, then performed the ceremony at his makeshift “pub pulpit.”

“That’s my life now—crazy and insane,” he grins. “It’s a pirate’s life.” (photo, above left: Sparrow with a favorite bartender at Hooleys)

Not every moment is humorous. Some of Sparrow’s most memorable occasions are both sentimental and heart-rending. During a school event, a young girl ensconced in a tent due to a learning phobia emerged during the pirate’s presentation. “She gave me the biggest hug and said, `You made my dreams come true today,’” he recalls. “I choked up and gave her a hug.” When the girl offered to give him an eagle she’d crafted from Popsicle sticks to remember her by, however, he declined. “I said, `Love, I will never forget you and I cannot accept this. I want to sign this with a message so you will never forget me. I have an infinite number of stories like that. When times get tough and I’m tempted to hang up my pirate hat, that’s what keeps me going.”

The past year had some tough times, with the entertainment industry hard hit by the economy. But Sparrow resolves, “When you have the least, you should give the most.” He regularly signs autographs with inspirational messages such as “Stay the course to your dreams.”

His fame growing, Sparrow was recently invited to the REEL Awards for celebrity tribute artists -- though he's not yet sure whether he's nominated for an award, or expected to perform.  He's tapped into a growing national celebrity look-alike business that is"huge", Sparrow says, complete with national conventions as well as the awards ceremony.

Sometimes, his celebrity proves challenging , however. Asked about the wench or wenches in his private life, he replied, “Due to my pirate lifestyle, it’s very hard to be in a relationship because attention from females that you get as a result of Captain Jack is tough to take…I had a Grandma slap my pirate booty at a Navy event! It’s very difficult to ask someone to put up with that.”

Another occupational hazard is being tied to the stardom of a single person. “That’s a blessing and a curse,” Sparrow reflects on the potential for a change in Depp’s fortune to impact his own career. But he adds quickly, “I’m very lucky to be able to pay tribute to one of the most talented actors ofour generation—and to play one of the most charming rogues ever to sail the seas.”

A t his East County home, Sparrow and friends once conspired to produce a video spoofing an MTV show on celebrity home tours, then posted it on YouTube. He also relishes communicating with fans and friends on Facebook and My Space.

“I think there is a pirate in all of us,” he concludes philosophically. “You just have to tap into it.”

To view photos and videos of Sam Sparrow, or learn more about his colorful career, visit his website at http://www.thelastrealpirate.com and check out these links:

There a lot of Captain Jack impersonators. It seems that the movie was indeed a hit and it made such an impact on all of us. I myself collect Anime swords but now I'd like a sword like the ones the pirates had in the movie. If anyone knows what they're called, please tell me! As for Sam Sparrow, he must have a lot of fun as Captain Jack. If we could all earn our keep by impersonating our favorite character!