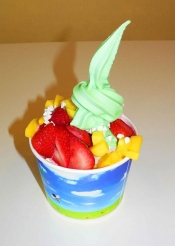 December 22, 2009 (Santee) – “People today like the new tart flavors,” says Michael Tran, owner of the new Yogurt World shop at 9331 Mission Gorge Road in Santee, where customers can fill up self-serve cups with such tangy options such as Asian peach, green coconut, and mango frozen yogurt. Consumers can also tap into the latest health food trends with flavors such as acai berry yogurt, or indulge their taste buds with dozens of toppings ranging from fresh strawberries and pineapple to nuts and candies. 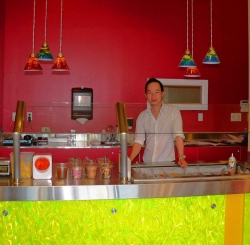 Frozen yogurt is back in vogue, as a new generation of consumers discover the joy of scooping up a frothy cool concoction slathered in scrumptious toppings. But unlike yogurt chains that were all the rage in the ‘70s and ‘80s, today’s entrepreneurial ventures are offering up far more than the sweet flavors of yesteryear—in settings that are different, too.

Fused-glass pendant lamps illuminate display counters at Santee’s Yogurt World, where the bright-colored décor is more evocative of an upscale bar or bistro than the yogurt chains popularized decades ago.

Tran is also reaching out to the community with some savvy marketing efforts. “We do samplings at schools, community groups, and other events,” said Tran, who previously operated a Yogurt World outlet in Kearny Mesa, where a large Asian population has savored the many Asian-themed flavors on the menu. 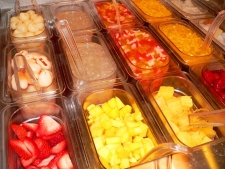 Opened in summer, the new Yogurt World shop in Santee is enticing East County customers to expand their horizons and savor new flavors of frozen concoctions. While starting a new business venture in today’s challenging economy may seem daunting to some, Tran believes the time is ripe. “Business is picking up,” he concludes confidently.

Print out a discount coupon to sample Yogurt World's frozen treats and find other holiday coupons at: