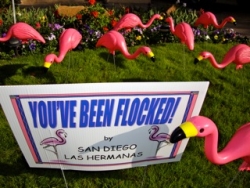 December 1, 2009 - - If you’ve wondered what’s up with those pink flamingo flocks you’ve been seeing around East County, wonder no more. In a clever response to charity fundraising in a down economy, San Diego La Hermanas  is stealth-flocking people’s yards.

The group sneaks into people’s yards at night (at the request of friends or colleagues), to leave a flock of the plastic yard decorations and a sign requesting a donation of $20 or more to send them on to the yard of your choice. Delighted “victims” have left thank you notes for making their day, and sent the birds flying on to friends with notes such as “Congratulations on your new job!” (Should a homeowner’s feathers be ruffled by the prank, Las Hermanas would remove them free of charge.)

Fortunately for the nonprofit organization, reactions have been overwhelmingly positive . The fundraising stunt has proven a startling success, putting Las Hermanas “in the pink.”

San Diego Las Hermanas is an East County woman’s group that raises money for local charities. This year it is fundraising for Horsemanship for the Handicapped , Fostering Opportunities Dollars for Scholars, and Ryan’s Cause.

While it has traditionally held two large annual fundraisers, it was decided in the current economy to only hold one big event this year. Therefore the group was looking for a way to reach a new, larger audience with many smaller donations to supplement their big event in the spring.

“We found pictures of a popular type event in the Midwest on the Internet, and decided to give it a try,” said the Melody Garry, event chair.