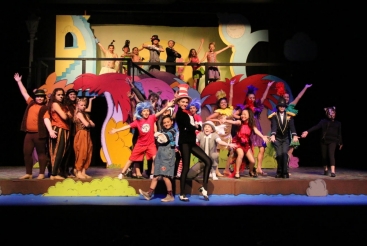 February 27, 2018 (Casa De Oro) - Who doesn't love Dr. Seuss? We all grew up with favorites. Mine were Green Eggs and Ham, and Go Dogs Go. Lynn Ahearns, Stephen Flaherty, and Eric Idle mashed several Seuss books together, Horton Hears a Who, The Grinch Who Stole Christmas, Green Eggs and Ham, Yertle the Turtle, and The Cat in the Hat, and came up with Seussical, the Musical.

Young Actors Theatre (YAT) enters into the colorful, whimsical world of Seuss. Horton says a person is a person, no matter how small. The young actors do not feel a role is a role. Each part, no matter how small is attacked with enthusiasm and gusto. As for the role of The Cat in the Hat, I've not seen better, with Horton right there alongside her for a full package of family entertainment. 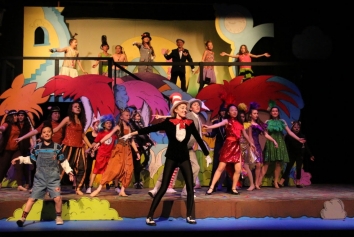 The Cat in The Hat character narrates the adventure of Horton, who hears a tiny voice on a spec of dust. He shows us his loyalty to save the small Whos and to lay on the nest of Mayzie Labird.

I love the characters in this show. The Cat in the Hat was played by rising star Mary Rose Vadeboncoeur. I was impressed with her performance as Millie in Thoroughly Modern Millie, but this--wow! Two such different roles. As the Cat in the Hat she was a definite star. Horton, played by Julia Swann, spins her own magic, more subdued, but wonderful all the same. So many characters, all so amazing. I do want to mention Marizela Mimbela Manzanilla, who played Sour Kangaroo, because she had such a powerful voice that commandeered her space on the stage. Mandy Keller played the sweet Getrude McFuzz and Carolynn Rui showcased her talent as Mayzie.

Director Dionisio and his team do great work at Young Actors Theatre bringing this large cast together for quality family entertainment. I'm also glad to see the sense of community continue as former actors Astrid Pett as assistant director and Alexa Cohen as choreographer are now coming back to help the new actors follow in their footsteps teaching what they learned in their years with YAT.

If you open your mind, oh the things you will find...