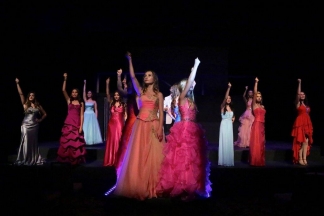 August 16, 2018 (Spring Valley) - Beauty pageants are big business, or used to be. This is an inside look at the fictional “The Young American Miss” contest held in Santa Rosa, CA. The musical is based on a screenplay by Jerry Belson, and filled with the wonderful music of Marvin Hamlisch. The 1987 film starred Annette O'Toole and Melanie Griffith.

Smile is directed by Chrissy Burns. Seventeen girls compete for the title of Young American Miss, with an array of colorful gowns in different styles. My favorite is Hanna Guzman, portraying Maria Gonzales, the product of backstage shenanigans. Her gown is red and sparkly and it gleamed in the lights. I also liked Doria's, a pink princess-like gown with sequins that twinkled. 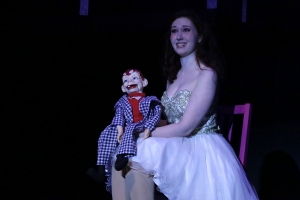 Doria, played by Kinzie Pipkin, is from Texas.  Pipkin does a great job with her accent and her singing was that of an angel. The other main pageant girl is Robin, played by Klarissa Miller, another magical voice. Jackie Battle plays Brenda Freelander, pageant coordinator, with a great piece of acting. The scene stealer is little Dylan Masis Thomas. He played Tommy French, the pageant choreographer.  He brought the laughs and made us smile. He had his timing down perfectly.

The theatre is set up with cabaret-style tables surrounding the stage and runway. The air conditioning is perfect for these hot August nights.  Come in and cool off, enjoy a musical, a beauty pageant and keep youth theatre alive and smiling.

For this musical, they have an unusual raffle that's kind of fun. They are raffling off your chance to be YAT Royalty for the evening. The winner receives a banner, a tiara and a chance to have your photo with the King and Queen. Any little girl would love this (and most big ones too).

The next show will be Aladdin Junior, a great family show. 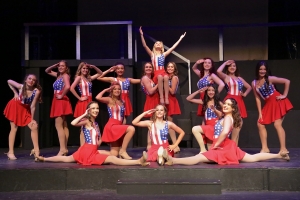