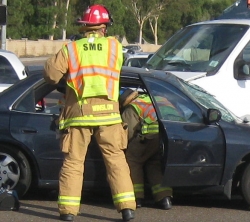 October 1, 2011 (El Cajon)—Dustin Beyer, 21, has been arrested for suspicion of being under the influence following a tragic accident at Chase Avenue and Jamacha Road in El Cajon at 4:35 p.m. yesterday.

“It looked like the small compact car had been run over by a white van,” said ECM assistant editor Mayan Avitable, who was on her way to a dance class nearby when she heard sirens, then came across the accident scene.

CHP Officer Brian Pennings states that witnesses and physical evidence indicate that Beyer failed to stop for a red light. His 2007 Ford Econoline struck a 2000 Honda Accord in the driver’s door. “The force of the collision caused major injuries to both the young male driver and his male passenger,” Penning said. 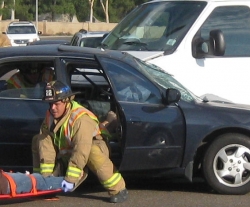 “Some people at the scene were saying that the small compact car was turning left, and the white van just ran over it, and that they had to remove the white van from the top of the compact,” Avitable said, adding that the compact car appeared crushed at the windshield. Trafffic ground to a halt as numerous emergency vehicles responded to the crash.

Both occupants of the Honda were transported via ground ambulance to the hospital. Beyer was arrested and faces felony DUI charges.