Ron Roberts, Chairman of the Board of Supervisors calls for letter grades, mobile phone aps for consumers to check ratings 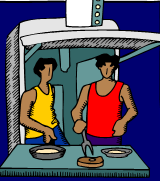 February 25, 2012 (San Diego) – Supervisor Ron Roberts has announced plans to introduce county legislation to create a grading system for the expanding fleet of local food trucks, which have increased dramatically in popularity across the county.

The measure follows investigations by the UT San Diego and ECM news partner 10 News, which found that about half of all food trucks received at least one violation notice from county health officials. However,  unlike restaurant records, food truck health safety records are not available online.  http://www.10news.com/news/30393605/detail.html.

Roberts legislation aims to “change the playing field” so that consumers can easily get inspection results on food trucks using smart phone applications.

Roberts has announced he will hold a press conference Monday along with the president of the San Diego County Restaurant Association and operators of local food trucks to reveal details.