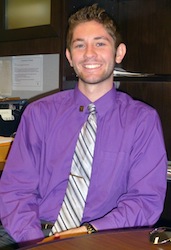 October 20, 2013 (El Cajon) -- Zack Gianino, who was installed Tuesday evening, Oct. 15, as a student trustee on the Grossmont-Cuyamaca Community College District Governing Board, describes himself as a man who is “strongly against apathy.”

“I do as much as I can to combat it,” said Gianino, 20, who also serves as vice president of the Associated Students of Grossmont College.

It was not always so. He said that he was an indifferent student at West Hills High School in Santee.  However, in the summer before he began attending Grossmont College in Fall 2011, Gianino purchased an iPad, and started “researching politics, what it is, what types of governments there are.” His research led him additionally to inquire into why people behave the way they do, what kind of variables may influence their behavior, and how different religions differ.

High school friends, who preferred to talk about upcoming concerts and gossip about celebrities, soon tired of his probing questions, Gianino said. No matter, he was on an intellectual self-improvement mission.

By the time he entered Grossmont College, Gianino had decided he wanted to major in political science to prepare himself as a career as an American diplomat.  He enrolled in one introductory political science class and another dealing with international relations. Excited by his studies, he participated in class discussions, prompting a fellow student—Esau Cortez—who was serving on the ASGC board to suggest to Gianino that he might want to serve on the board as well.

Gianino accepted the invitation and spent a few months learning about the various aspects of ASGC by staffing booths, making posters, and manning the front desk of the ASGC offices. When  ASGC vice president Blake Davidson resigned because he was moving to Nevada. Gianino and Cortez both ran in a special election in December 2012 to fill the position, with Gianino just edging out Cortez.

Not long afterwards, Cortez was elected as president of ASGC, and the two men have been serving together as the organization’s top officers. In his capacity as vice president, Gianino serves as the presiding officer of the Inter-Club Council (ICC), which coordinates the activities of on-campus student clubs. At least once a semester, the various clubs set up booths on the Main Quad at Grossmont College to tell passersby about their goals and events.

Gianino succeeded student trustee Peg Marcus in a close election in which he prevailed over his fellow ASGC board member Michael Zuniga.

“Zack is an excellent listener, who seeks out the opinions of his fellow students to learn how the ASGC can better serve them,” commented Sara Glasgow, Grossmont College’s interim associate dean of student affairs. “Through his service on a variety of campus and district committees, Zack has demonstrated a passion for advocating on behalf of the interests of the students of Grossmont College. His insight will be a wonderful addition to the board.”

Gianino said that as a trustee he hopes to be both an advocate for Grossmont students as well as a channel of communication between the trustees and the student body.

“Students have good ideas, but often they just don’t know how to vent them, or who will listen,” Gianino said. “I would like to show the students that their combined power is influential. I’d like them to be aware of legislation coming down the pike, and know about decisions that may affect them. I believe students should have input into major decisions, because without the students there would be no reason for this institution.”

The new trustee noted that state budget cuts had resulted in fewer classes being offered the past four years, forcing students to take longer to earn their associate’s degree or to transfer to four-year institutions. Given that students are spending more time at Grossmont College, he said, efforts should be made to make the campus seem more like a university. “There should be more fun times for students, more spirit,” he said. “I’d like to see more events.”

Gianino said Grossmont College has a diverse student population. Some students have just graduated from high school. Some have returned to college after being in the work force for a few years. Some are military veterans. Some are people with advanced degrees in other fields who want to try learning something new.

As student trustee, he said, he wants to be in close touch with all of the constituencies to represent them effectively.