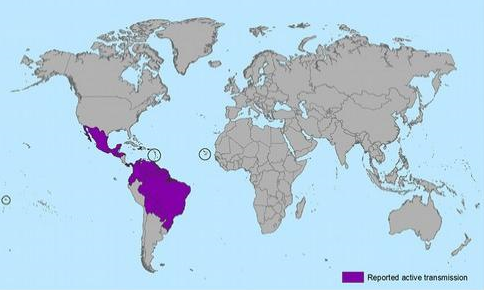 January 24, 2016 (San Diego’s East County) – Zika virus may be responsible for a rise in Guillain-Barre syndrome that can cause temporary paralysis, muscle weakness, and sometimes life-threatening breathing problems. In Brazil, 24 of 42 people diagnosed recently with Guillain-Barre, a normally rare condition, also tested positive for Zika virus, a mosquito-borne illness, ABC reports. World Health Organization has warned that a similar link is being found in other places including El Salvador and French Polynesia.

Zika is also believed to be the cause of several thousand Brazilian babies born with microencephaly, or small skull, resulting in often severe brain damage and sometimes death. A woman in Hawaii who had traveled to French Polynesia has given birth to a baby with microencephaly after contracting Zika virus overseas, U.S.News reports.

Cases of Zika have now been confirmed in Florida, Texas and Puerto Rico.  In California, four patients in Los Angeles are undergoing testing for Zika, as is a woman in the San Francisco Bay area.

The Centers for Disease Control has issued a travel warning advising pregnant women to avoid travel to Mexico and numerous other countries in South America, Central America and the Caribbean as well as Samoa in the Pacific and Cape Verde, Africa.  Click below for details on each region:

There is no treatment or vaccine, through Brazilian authorities are working to create a vaccination.

Some areas with heavy infestations of Zika-carrying mosquitoes are advising pregnant women to avoid getting pregnant now.  If you are a woman who contracts Zika, some authorities advise delaying pregnancy for up to two years.

The mosquitos that carry Zika have been found in San Diego County in recent months, though no cases of Zika have been found thus far.  Residents are urged to clear out standing water and report any green pools or other stagnant water to the County’s Vector Control Department.  The Aeges mosquitoes that can carry Zika, as well as Dengue Fever, Yellow Fever and other illnesses, are aggressive, smaller than native mosquitoes, and can breed indoors.

If you must travel to an area with Zika virus, take steps to avoid mosquito bites including wearing insect repellants with Deet, Picaradin, IR3535, or oil of lemon eucalyptus.  Wear long sleeves and long pants and be sure your sleeping area is enclosed with screens in good repair or use air conditioning and keep doors and windows closed.