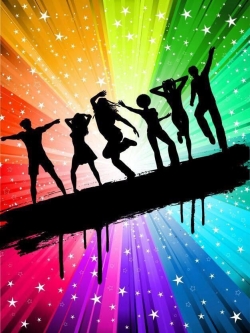 March 19, 2019 (San Diego’s East County) – Activists have announced plans for a “Rainbow Dance Party” to counter picketing by the hate group Westboro Baptist Church on Monday, March 25th. The counter-protesters will begin their event at 6:45 a.m. at El Cajon Valley High School, shortly before Westboro’s picketing starts at 7 a.m.  Then the rainbow dancers and marchers will proceed to Monte Vista High School in Spring Valley, arriving before Westboro’s picketing at 8:30 and remaining until 9:30 a.m.

As ECM reported, Westboro Baptist Church has been designated a hate group by the Anti-Defamation League and by the Southern Poverty Law Center.  The cult-like group has gained notoriety for its “picketing ministry” at which members hold signs bearing messages such as “God Hates Fags,” Thank God for Dead Soldiers,” “Jews Killed Jesus,” and “Thank God for 9/11.” The group has been banned from entering some foreign countries, including Canada and the United Kingdom. They have also protested at funerals of soldiers and slain Sandy Hook Elementary school students.

“Why, you ask? Who knows. We can't look for reasons in what these people do. I know that their prerogative is to instigate people into lawsuits, while spreading their hateful, anti-LGBTQ rhetoric. But the fact of the matter is that their hateful signs and slogans hurt our community.”

The post continues, “So how should we respond? How about with a Rainbow Dance Party Parade? How about with bright costumes, funny signs, music, kazoos and balloons. Let's show the world that love conquers hate, and take some joy in trolling this hateful group.

We're not going to let high school students go start their day seeing these picketers and feeling bad about the world they live in. We're going to show up and send a message to ignore Westboro Baptist Church. They are the hate-filled minority. Love will win!

So get pumped! Bring music! Bring your kids! Bring signs! Dress up! Or just bring yourself because you are fabulous just the way you are. ♥

We will have kazoos, snacks, balloons, and be ready for a fun-filled morning of being fabulous in the face of hate.

Westboro has been denounced by the world’s largest Baptist organizations as well as by many mainstream Christian churches, conservative Fox News commentator Bill O’Reilly and liberal activist Michael Moore, among others. Westboro’s targets are broad; one of their new posters reads “Most people go to hell.”

Westboro’s website lists the picketing events but does not state why specifically the group is targeting two high schools in San Diego’s East County with large minority populations. Westboro did not respond to our email requesting comment.

Grossmont Union High School District director of public affairs and legislative relations Catherine Martin told ECM, "We’re not participating in any way. This action was brought to our attention by law enforcement. We’re having conversations with the El Cajon Police Department and the Sheriff’s Department (RSD Station) to ensure safe passage of our students to school that morning. They have plans in place to ensure order and safety.”

“This is appalling. We have no room for hate in El Cajon,” Latino rights leader Estela de los Rios at CSA told ECM. De los Rios says she has been actively involved in efforts to reduce bullying at El Cajon Valley High School, adding that “children of color are treated differently regarding bullying,” with children of Mexican and Middle Eastern heritage most negatively impacted.

Rev. Shane Harris, national president of the People’s Alliance for Justice, offered a national perspective on Westboro’s picketing in cities and towns across the U.S. “We stand against any kind of message of hate, no matter who it is against.” He added, “Their message is not God’s message of unity.”

That's right, shut the haters down! WWJD? Show them love & forgive them.