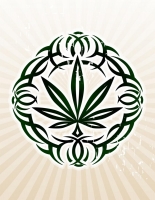 May 9, 2014 (Lakeside) – Sheriff’s deputies from the Santee station responded to a report of a burglary at the Aurora Green Dispensary at 8575 Los Coches Road, #2, in Lakeside.  After searching the area, they found Wendell Coleman, 37, hiding in bushes on nearby Snow White Drive and arrested him. Coleman had a large amount of marijuana and baked marijuana goods in his possession that the business owner identified as stolen property, said Lt. George Calderon.