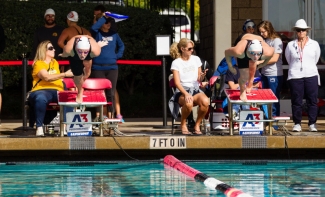 Joining Caplan with a team-high three all-conference honors was Klara Thormalm, McKenna Meyer, and Frida Berggren. Berggren claimed a pair of individual titles at the MW championships, recording first-place times in both the 200 fly (1:58.05) and 200 IM (1:59.28).

Thormalm posted a trio of top-3 finishes last week, including second-place times in the 200 breast (2:12.13) and 50 free (22.77). Thormalm also contributed to three of SDSU’s relay teams that received an all-conference nod.

Including an individual title in the 100 fly, Courtney Vincent earned all-conference awards in both the 100 and 200 fly.

Now, the team is currently waiting to see what times qualify for the NCAA Championships, which take place from March 14 – 17 in Columbus, Ohio.