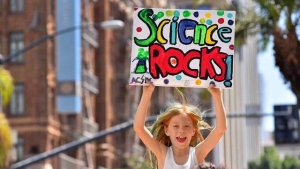 Story and photos by Chris Stone

April 23, 2017 (San Diego) - Ralph Keeling and Lynn Talley of Scripps Institution of Oceanography aren’t household names. But they lent their scientific weight Saturday to an event that attracted a reported 15,000 people downtown.

At one point in the rally, the call went out to scientists to identify themselves. Many hands rose.

A typical chant: “What do we want? Science! When do we want it? After peer review!” 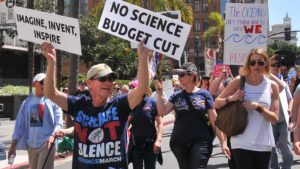 The San Diego March for Science was one of hundreds in the United States and worldwide marking Earth Day to raise awareness of the contributions of science to society, and the importance of supportive public policy, organizers said.

The event kicked off with remarks from area scientists at the Community Concourse in the Civic Center complex next to City Hall, followed by the march down Broadway to the Waterfront Park outside the County Administration Center.

Marchers carried signs saying “build science not walls,” “ice has no agenda it just melts,” “we do not inherit the Earth from our ancestors, we borrow it from our children,” “there is no planet B,” “no science? no beer,” “climate change is real,” “science rocks,” and “science makes America great,” among many others.

The group also heard from Martha Dina Arguello, executive director of Physicians for Social Responsibility in Los Angeles. “Today the Cold War is over and the nuclear threat is not,” she said. “There is no meaningful medical response to a nuclear war” except disarmament.