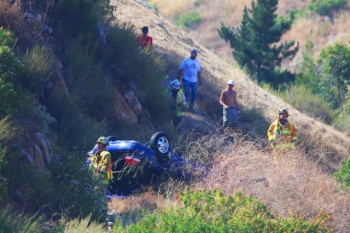 June 29, 2010 (Lakeside) – An accident  has claimed two lives on Highway 67 near Slaughterhouse Canyon Road in Lakeside. According to the California Highway Patrol, a dark blue vehicle plummeted 200 to 300 feet down an embankment before landing upside down.

A law enforcement source at the scene informed East County Magazine that the vehicle was spotted by a property owner nearby who reported it at 3:45 p.m.  It is not known when the crash occurred. "It could be a few days ago," said Brian Penner, CHP spokesperson, who added that no skid marks were seen on the roadway.

Penner later issued a statement that "suspicious evidence" was found at the scene and that the Sheriff's Department has been called in to investigate. He declined to state the nature of the evidence found.

According to Incident Page Network, two victims were ejected, both pronounced dead at the scene. Rescue workers and a helicopter searched the scene for any additional victims but found none.