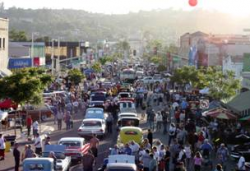 Opening Night of the popular Cajon Classic Cruise has been moved up four weeks to Wednesday, April 6, and a number of additional Theme Nights have been added. (See complete schedule below.)   Now in its 11th season, the weekly car show will run every Wednesday night through October 26 from 5-8 p.m., with a special Holiday Parade of Lights Show on December 7, 2011.

Admission is free to the Cajon Classic Cruise, which features more than 500 classic, custom and hot rod cars and motorcycles valued at more than $10 million presented weekly within a lively street festival setting. The Cajon Classic Cruise is centered on East Main Street at Prescott Promenade, just east of the intersection of Main and Magnolia. Thousands of spectators each week stroll El Cajon’s historic downtown district while enjoying the cars, the action, restaurants, street vendors, food, DJs, and live entertainment presented amid a vibrant small town atmosphere.

In planning for the past several months, the 2011 Cajon Classic Cruise season will be bigger and last longer. “We have expanded the season by several weeks this year, and we’ve scheduled even more cars and bikes,” said Courter.

Presented by Sycuan Casino and the El Cajon Community Development Corporation, the Cajon Classic Cruise offers new attractions each week, including awards for the top cars, parades, special salutes, and a variety of themed events, like Funny Car Frenzy, A Salute to the U.S. Military, and Dragsters! Dragsters! Dragsters! Cajon Classic Cruise 2011 will also feature special entertainment, raffles, and more. Trophies are awarded weekly in several categories and all cars are welcome to enter.

Many thanks for publishing the entire schedule of Cajon Classic Cruise 2011 Season. I can now act accordingly on planning my time, so as to make sure I`ll manage to reach at least four or five events on your list. I have always been a fan of car shows. My reliable purchase with the autos Philadelphia made me appreciate cars even more. And I am eager to learn as much as I can about the auto industry.