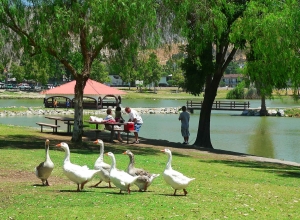 January 30, 2020 (Lakeside) -- This morning deputies from the Lakeside Sheriff's Substation concluded a 10-month investigation into the sale of narcotics at Lindo Lake Park, Lakeside. Search and arrest warrants were served at multiple locations in Lakeside and El Cajon regarding the sales of methamphetamine, heroin and fentanyl.

Twenty-one suspects were taken into custody facing charges in State and Federal Court ranging from narcotics offences to outstanding warrants. During the operation methamphetamine and weapons were located and confiscated.

“This operation was conducted in order to keep our parks and recreational areas safe for children, their families and the entire community to enjoy,” says Sgt. Tim Chantler.

Deputies from the Lakeside Substation worked with additional investigative units within the Sheriff's Department, the San Diego District Attorney's Office and the U.S. Attorney's Office. “This investigation could not have been accomplished without their assistance,” Sgt. Chantler added.