An ECM investigation finds that a Ramona lab whose spokesman claimed it does not use chickens had promoted chicken antibody research before recently scrubbing its website.

September 12, 2019 (Ramona) – At a town hall meeting for concerned bird owners held  Sept. 10 at the Ramona Library, Calif. Dept. of Food and Agriculture officials confirmed that 50 to 100 birds at eight properties have been euthanized due to exposure to Virulent Newcastle Disease (vND). Representatives from the U.S. Dept. of Agriculture were also present.

The Ramona case, the first in San Diego during the current Southern California outbreak, was diagnosed Aug. 31, as ECM reported. The case has been traced to a bird illegally moved from a quarantine area in Riverside to an antibodies lab in Ramona. It’s unclear whether that action was due to a broker/supplier of birds or to the lab itself, which authorities did not name due to security concerns and threats made against a veterinarian who reported an ill bird. 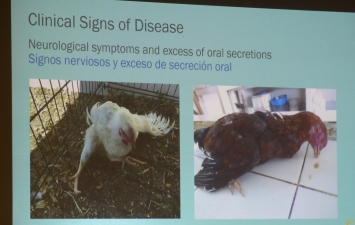 vND is an infection that affects domestic poultry and other bird species. It’s deadly for chicken and some other poultry, however some wild birds can be carriers so keeping wild birds out of coops where poultry are kept is advised.

“This is one of the most severe diseases due to its ability to spread fast,” Dr. Fred Cantor, public information officer for the CDFA, told residents.  Even vaccinated bird can contract vND, a strain of Newcastle not normally found in this country. The strain found here has been traced to Belize, in central America.

The disease is highly contagious and is fatal 90 percent of the time in chickens; survivors often suffer severe neurological damage and may continue to be shedders carrying the disease for months. vND progresses rapidly and death can occur suddenly, sometimes before any symptoms are seen. Symptoms may include sneezing, gasping for air, nasal discharge, coughing, greenish watery diarrhea, decreased activity, tremors, drooping wings, twisting of head and neck, circling, complete stiffness, and swelling around the eyes and neck.

VND is a low-level health concern for humans. Only those with intensive exposure, such as veterinarians, are apt to contract it and in humans it causes only mild conjunctivitis and mild flu-like symptoms. Properly cooked eggs and poultry are “delicious and safe to eat,” Cantor assured despite Newcastle concerns.

Los Angeles, San Bernardino, and Riverside counties are already in a quarantine zone. Ramona’s quarantined zones are localized to specific sites and authorities have gone door to door notifying those impacted. Authorities emphasized the importance of not moving birds out of quarantined areas until the state veterinarian deems them safe. If no new cases are found, local areas may be cleared around the first of the year.

Statewide, progress had been made, with no positive test results from June 4 to August 14.  “We are seeing light at the end of the tunnel,” Cantor noted.

In Ramona, in addition to mandatory killing of birds in a 250 meter radius around the site where the disease was detected, there is another ring of 250 to 500 meters where testing is mandatory and a target surveillance area that extends out for a kilometer.

A Ramona resident learned first-hand about vND when California Department of Food & Agriculture (CDFA) staff showed up at her gate.

“My own chickens, seven, were mandatory kills,” Ana Unibe, who lives on Griffith Road in Ramona, told ECM.  “They (CDFA) showed up at my gate on Labor Day weekend, asked if we had poultry, and notified us we were in the quarantine zone.  We fell inside the mandatory kill area.”

Unibe is not the only one who had birds exterminated.

“My friend got hit last week. They found a bird that was sick,” said Ramona resident Caesar Valdez. Valdez declined to mention his friend’s name.

An antibodies lab was ground zero in Ramona 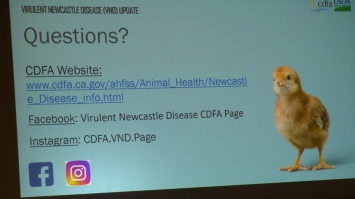 n Los Angeles, San Bernardino, Riverside, and now in San Diego County efforts to eradicate the disease has led to threats, anger, protests, and community members trying to track down where “ground zero” is located.

Many in Ramona are speculating where “ground zero” is.  “I have asked CDFA were ‘ground zero’ is,” says Unibe.

At the town hall, one resident asked government officials for more transparency on the source, but officials said they are protecting privacy and security of those involved.  Two Sheriff deputies were present in the back of the room, driving home the security concerns.

Another link from OiE Newcastle disease, U.S. notes the affected population is based at “chickens at an antibody facility” with six bird deaths and 54 killed and disposed of, for a total count of 60.

Virulent Newcastle disease means a loss of money to the owners of small and large chicken flocks.

The government does provide money to reimburse those forced to have their birds euthanized through an indemnification program, but the total is often inadequate to fully cover losses, officials acknowledge.  Some residents are squawking about potential civil claims against whoever is responsible. Authorities confirm they are looking at the possibility of a criminal action; if a criminal charge is filed, the name of whoever was responsible for illegally moving a bird out of a quarantine area would become public.

“We spent about $300-$400 for the chickens," Unibe said. “My neighbors across the street had four chickens killed. The neighbor next to them had quite a few.”

“I believe that it should be stopped if your chickens are sick with it,” she acknowledged, but adds, “I also believe that owners should have the right to have their flocks tested if they show the symptoms” rather than be exterminated.

NBC Los Angeles, in a story by Tony Shin, reported on the protests and reactions from quarantined zones.  NBC 7 San Diego is working in conjunction with ECM on the story in San Diego County.

“I’ll be happy when whomever is responsible for bringing this to our town is held responsible,” says a Ramona resident who wished to remain anonymous The source mentioned there are at least  two research facilities in Ramona: ProSci, Inc. and Abcore.

However a second source in the industry, who asked that we not disclose his name, told ECM that  there are around 10 antibody testing labs in Ramona.

ECM editor Miriam Raftery questioned a spokesperson for Abcore, who denied that his facility had Newcastle case. “It wasn’t ours. We are in Ramona; we do biotech, but it wasn’t ours. We don’t deal with chickens,” the source stated.  The source asked to stay anonymous, citing threats made and some statements made on social media of a “crazy” nature. “I don’t want to put anybody in harm’s way.  I’m concerned. Everyone here has families, so it’s why I’m being more protective than I ordinarily would,” said the spokesperson.

After the conversation, an ECM invesigation revealed that AbCore did conduct antibody research with chickens as recently as late June, but has scrubbed most references off its website at this link: https://www.abcore.com/chicken-antibody-production/.  See screenshot below from a cached image of the same page taken on June 30, 2019 at  http://webcache.googleusercontent.com/search?q=cache%3Ahttps%3A%2F%2Fwww.abcore.com%2Fchicken-antibody-production: 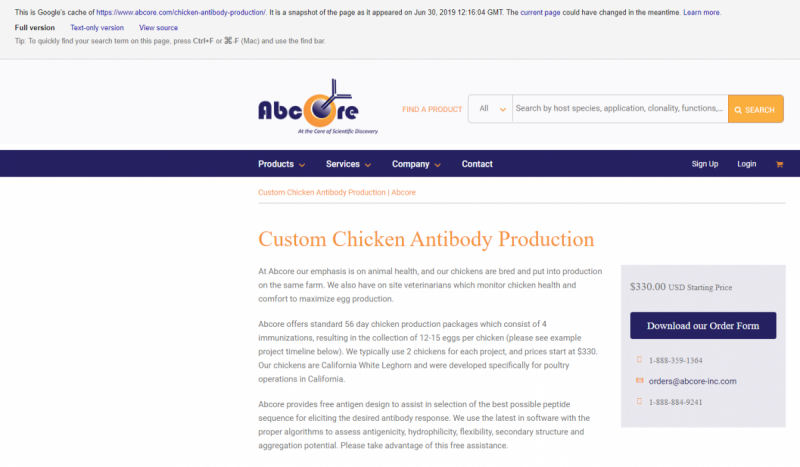 Additional information confirming the company's use of chickens remains on an additional company webpage at https://www.abcore.com/blog/why-use-chickens-for-antibody-production-a-310-million-year-journey-to-the-lab/ that as of Sept. 12 has not been removed: 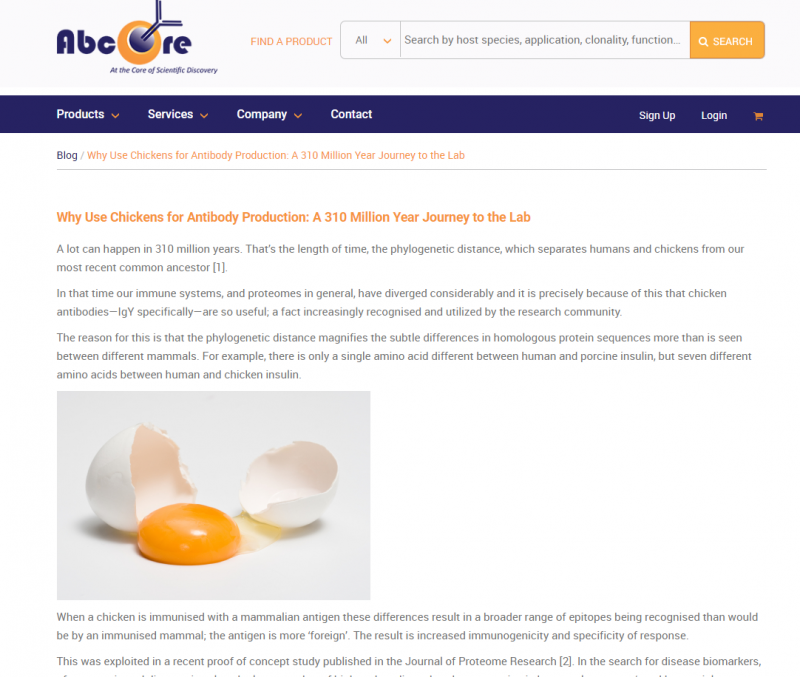 Abcore's website lists only one facility--in Ramona. It is unclear whether the company ceased using chickens before the Newcastle case was diagnosed in Ramona, or eliminated its chickens only after Newcastle was found locally. It is also unclear whether any chickens were exterminated on the property which is in close proximity to other properties where mandatory euthanasia was enforced.

ECM reached out to ProSci, Inc. but at press time there was no response. However a spokesman for ProSci told ECM news partner NBC 7 that ProSci has not had a Newcastle case of vND, either. 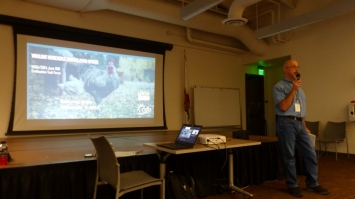 Dr. Cantor gave a presentation on the outbreak and ways to combat it, at the Ramona town hall to an estimated 65 attendees, then fielded audience questions.

Stopping the spread of vND is taken very seriously by CDFA.  How it is reported, found, treated, and eradicated typically comes down to a “rapid-response” situation.

Historically, outbreaks of Newcastle resulted in millions of chickens destroyed --12 million in 1972, and a loss of $5 billion in 2003, with businesses closing and jobs lost, as well as losses of pet birds and higher chicken/egg prices according to Cantor and the USDA.

Cantor urged everyone to take proper biosecurity methods such as disinfecting all people and vehicles going in or out, using a product such as Lysol and foot baths to disinfect shoes. Don’t borrow tools or move birds, which can incubate the disease for 2 to 15 days before coming down with vND.  Dispose of dead birds by double-bagging and spraying the outside with disinfectant; store in a cool place and call for pickup and testing.  Biosecurity is needed even for vaccinated birds, since the vaccine does not protect against this vND strain.

One elected official, Senator Brian W. Jones, has had constituents contact his office.

“After hearing the concerns, I immediately reached out to CDFA to get an update on the VND incident and how it was being addressed so that I could share that information with my constituents.  My team attended Monday’s town hall, and we’ll continue to monitor this closely,” Senator Brian W. Jones states in an email.

Coping with a stressful situation

Cantor acknowledges that being forced to euthanize chickens which some consider family pets is “heartbreaking.” 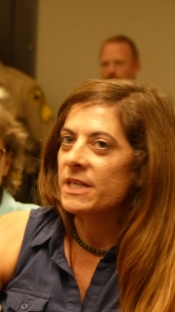 Hannah Gbeh, head of the San Diego Farm Bureau (photo, right), was at the town hall and noted the community still has “frustration at the lack of information.” She asked where concerns could be addressed; Cantor suggested the U.S.D.A. and the Calif. State Veterinarian.

Reactions to the outbreak locally are mixed.

Nunke is taking precautions to avoid the disease. “We have cans of Lysol, which kills Newcastle, at our gate and other cans on site. People coming in or out spray the bottom of their feet.”

She says, “The vets and techs (who did the testing) did not provide last names. I asked why, and they said they were receiving death threats.”

In Riverside, some residents complained of heavy-handed tactics and mistreatment of birds, which are supposed to be euthanized humanely with C02.

Speaking at the town hall in Ramona, however, Nunke said the officials who visited her property were “polite” adding, “They are people who really care – not vigilantes looking to kill birds. They were all very clean and careful.”

She urged neighbors, “Let’s cooperate and get this done so this won’t happen again. I’m sure the person who moved that bird feels horrible. Let’s all be the voice of reason here and do the right thing.”

Cantor echoes that sentiment, concluding, “Let’s put the energy against the virus.”

USDA link listing additional products to use in the fight against Newcastle: https://www.aphis.usda.gov/animal_health/emergency_management/downloads/potential-disinfectants-to-use-against-vnd.pdf