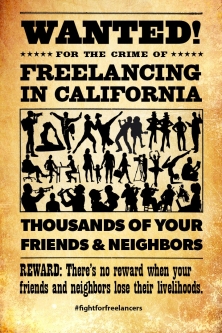 A national version of AB 5 is slated, which radically revises employment laws, is slated to be voted on in the House of Representatives this week with backing of California's two Senators

Image courtesy of #FightForFreelancers, which is battling a measure similar to California's AB 5 law. The seriously flaws legislation in our state is being emulated across the nation even as lawsuits, reform and repeal measures are pending in California.

February 4, 2020 (San Diego) – State Senator Brian Jones (R-Santee) is  coauthoring multiple bills to repeal and/or reform Assembly Bill 5, which took effect January 1, decimating independent contractors in a wide range of fields as well as the businesses and nonprofits that have long relied on freelancres.

AB 5 was introduced by Lorena Gonzalez-Fletcher (D-San Diego), a former labor leader who touted it as a way of cracking down on companies such as Uber and Lyft for exploiting workers and forces even small businesses and nonprofits to make most workers employees rather than independent contractors.

But the costs of doing so are prohibitively high for many businesses and organizations, putting their futures at risk. The law has also had devastating effects on freelancers across at least 150 fields including musicians, writers, artists, actors, dancers, nurses, consultants, translators, photographers, teachers and other independent contractors who value their freedom and flexible schedules and don’t want to be employees.

Some are now unable to find work due to AB 5, as out of state companies cancel gigs with California freelancers, unwilling to risk criminal penalties and huge fines for misclassifying workers under the convoluted, complex and confusing terms of the law. Other freelancers have shelled out high costs to start their own companies in order to qualify for business-to-business exemptions in the bill, but receive no benefits for those expenditures.