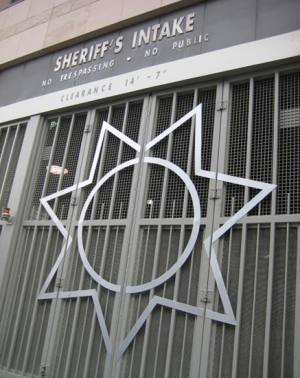 Photo Credit: This Photo by Unknown Author is licensed under CC BY-ND

Filed in San Diego County Superior Court, the lawsuit demands that Sheriff Gore reduce the population of the jails to levels that allow people to practice and maintain safe social distancing, and to provide widespread vaccinations in the jails at levels that can ensure the safety of everyone incarcerated there

San Diego County jails are in the midst of a months-long COVID-19 outbreak where at least two people, Edel Corrales Loredo and Mark Armendo, died of COVID-19 after apparently contracting the virus while incarcerated in county jail.

In late December 2020, there were 527 people with active COVID-19 infections in custody. There have been more than 1,200 cumulative positive cases in the jails since the start of the pandemic. 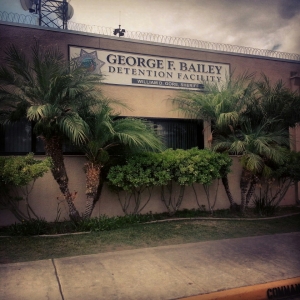 Earlier this month, the Sheriff’s Department announced a troubling development in the outbreak of COVID-19 cases in county-run jails. In a press release, the sheriff said 106 people were tested for COVID-19 after a person at the George Bailey Detention Facility (photo, right, courtesy: JMS from Foursquare) tested positive for the virus. Of the 106 tests, 46 people tested positive.

The inmate, who was hospitalized after developing symptoms on Feb. 27, was booked into the San Diego Central Jail on Feb. 15. After quarantining for seven days, he was transferred to the George Bailey facility, where he was moved to different modules in the same housing unit.

In December, the ACLUF-SDIC sent a letter to Sheriff Gore urging him to take action to prevent the COVID-19 crisis in county jails from getting worse. The sheriff’s response acknowledged his authority to release people to ensure their safety but emphasized his determination not to exercise this authority.

“Sheriff Gore has a statutory duty and a moral obligation to ensure the safety of people who are trusted to his care, but he has a long and troubling history of shirking this duty and failing to meet his obligations,” said Jonathan Markovitz, a staff attorney with the ACLUF-SDIC. “Vaccines offer a glimmer of hope for the future, but as we continue to learn of ever more virulent and potentially deadly variants of the virus that causes COVID-19, common sense precautions are more important than ever. Tuesday’s report of a dramatic escalation in positive cases provides stark evidence of the consequences for the sheriff’s failure to implement basic safety measures.” 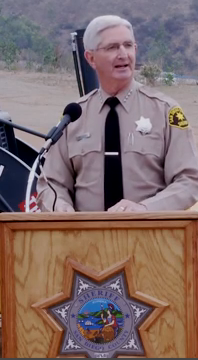 Public health officials have said vaccinations and protective measures, like social distancing, are crucial to preventing the spread of COVID-19. But, to date, Sheriff Gore (photo, left) has failed to announce plans to offer COVID-19 vaccinations to most incarcerated people all while conditions at some of the jails remain too crowded to practice social distancing.

“Our carceral system had issues before COVID-19, but the virus has magnified and exacerbated the issues present in our jails,” said Geneviéve Jones-Wright, executive director at Community Advocates for Just & Moral Governance. “We all must be clear on this fact: Incarcerated people are people. Their lives have value. The human beings in our jails have not been sentenced to death and should not fear a death sentence because they are locked up. This is a moral issue. This is about our standards of human decency as much as it is about public health.”

Brody McBride, a partner with Singleton, Schreiber, McKenzie & Scott, LLP, added: “Jails are pandemic hotbeds, ripe for COVID-19 outbreaks. The close living quarters, mass transports, and inter-facility transfers of inmates all but guarantee super-spreader events. The San Diego Sheriff's Department has been on notice of this reality since early 2020, yet the number of jail staff and inmates hit with COVID-19 continues to rise. Beyond the tragic toll the virus has taken on jail staff, individual inmates, and their loved ones, sick inmates require medical care and sometimes a hospital bed in the community. The cost of this care, paid for by taxpayers, is going to continue rising until the majority of jail staff and inmates are vaccinated.”

On March 11, the same day that the lawsuit was filed, the Sheriff issued a new press release with an update on the COVID-19 outbreak at the George Bailey Detention Facility (GBDF). The release provides a timeline of “how it happened” as well as plans for future vaccinations of people in the Sheriff’s custody.

The release states, “On February 15, a man was booked into the San Diego Central Jail for charges related to driving under the influence.  All individuals being booked into county jails are asked to take a COVID-19 test.  This test is voluntary.  There is no legal authority requiring the test.  Per the Sheriff's Department's COVID-19 jail protocol, he was classified and placed in quarantine for seven days where inmates receive temperature checks twice a day.”

According to the press release:

To maintain quarantine space at the San Diego Central Jail, it is necessary to move inmates to other facilities once their quarantine period expires if no symptoms are present.  As a result, the inmate was subsequently transferred to the George Bailey Detention Facility (GBDF) in Otay Mesa on February 22 where he was housed in dormitory housing appropriate for his classification level.  Over the next few days, the inmate was transferred between different modules within the same housing area, due to behavioral issues.

On February 25, the inmate was evaluated by medical staff for an issue unrelated to COVID-19.  At that time, he did not display nor complain of any COVID-19 symptoms, the release states. But on February 27, the inmate began showing flu-like symptoms.  Facility medical staff evaluated and tested him for COVID-19.  The inmate was sent to the hospital via ambulance for further evaluation and treatment.   The module he was housed in was immediately placed in quarantine and the inmates were checked for symptoms.  None of the inmates in the housing area were symptomatic.

In accordance with recommendations from the U.S. Centers for Disease Control and Prevention (CDC), testing for inmates in the quarantined area was not immediately conducted to account for the incubation period which will allow for more accurate test results, thus minimizing false negative tests.

On February 28, the inmate was discharged from the hospital and returned to GBDF where he was isolated in the medical area of the facility where hourly nursing rounds are conducted.

Once the need for quarantine was determined, contact tracing was initiated.  In each COVID-19 positive case, a thorough contact investigation is conducted to identify inmates and staff who may have been exposed.  Those who test positive are isolated for a minimum of 14 days.  If that person is in our custody, they are monitored by Sheriff's medical staff.  Legally required release dates are not extended based on positive or pending COVID-19 test results.  Those released prior to results being available are followed up with by the County Department of Public Health.

Contact tracing was completed on March 3 which concluded the inmate had high risk exposure with inmates in House 1A and 1C.  No other areas were identified as high-risk exposure.  House 1A remained in quarantine and 1C was immediately quarantined and scheduled for testing to account for the incubation period which allows for more accurate test results as medically indicated.

On March 6, 106 inmates were tested due to potential contact with this inmate.  On March 8, the test results found 46 positive cases and 60 negative cases.  The positive cases were checked for symptoms and moved into isolation areas in cell-style housing units, which allows for less exposure between inmates.

Inmates assigned to 1A were offered tests because of their exposure.  Of the 108 inmates, only 12 agreed to be tested.  As explained earlier, testing for COVID 19 is invasive and remains voluntary for the inmate population in respect of their legal rights.  Of the 12 inmates tested, one additional positive case was discovered, and he was isolated per our protocol.

“We do not underestimate the challenges we face to keep COVID-19 from entering our county jails and have taken immediate action to safeguard the lives of people in our custody and those who work in our facilities,” the Sheriff’s press release states.

Continuing measures in response to COVID-19 include:

“The Sheriff's Medical Services Division is working closely with the County Department of Public Health concerning our ongoing COVID-19 response and clinical trends in support of the contact investigations.  We have begun the process of vaccinating our inmate population who are eligible based on federal, state and county health guidelines.  When the tier opened for those 65 and older, inmates eligible and wanting the vaccine got it. As of March 10, 26 inmates received the vaccine while 25 others refused. We anticipate a delivery of vaccines from County Public Health on March 15 which we will use to vaccinate individuals in our custody with the following conditions,” the release states.

The Sheriff's Department does not have direct access to the vaccine, but plans to work with public health officials to receive supplies and vaccinate the remaining inmate population when the appropriate phases and tiers open.

“ We are confident our efforts to vaccinate the jail population will be a major benefit to the inmates in our care,” the release states.

The Sheriff’s department also cited what it called “factual errors” in a San Diego Union-Tribune about the outbreak at GBDF. The reporter said there were seven inmates hospitalized at Tri-City Medical Center in Oceanside, but according to the Sheriff’s department, none of them were hospitalized due to COVID-19, though one was admitted for another reason and found to be COVID-19 positive.

The reporter also wrote GBDF was within 11 beds of capacity.  “That claim is inaccurate.  On the date the article was published, GBDF was 68 beds under the Board of State and Community Corrections (BSCC) rated capacity.”

Since the beginning of the COVID-19 pandemic, the Sheriff's Department has implemented strategies to reduce jail populations in the interest of the safety of inmates and jail employees.  Since March of last year, 5,354 inmates have been released as a result of population mitigation strategies. These include the emergency booking criteria, 60-day release court order, Sheriff's accelerated release credits and collaboration with our justice partners on stipulated releases.

But inmates sentenced to state prison continue to be refused acceptance for transfer due to COVID-19, so the Sheriff's Department is currently housing 429 inmates who have been committed to the California Department of Corrections and Rehabilitation (CDCR),  straining local authorities’ ability to contain the spread of the virus in county jails.

“As our nation continues to respond to the COVID-19 pandemic, the Sheriff's Department will evaluate any key information learned through contact investigations and adjust accordingly.  Our protocols to date have been effective in limiting COVID-19 cases within our jail system.  Existing practices at our intake facilities allow for the accommodation of symptomatic inmates at the time of booking.

The Sheriff's Department is committed to the safety, security, health, and well-being of people in our custody.

Visit www.sdsheriff.net and click on the "COVID-19 Response" slide to learn about all the safeguards in place to limit the spread of the virus in San Diego County jails.