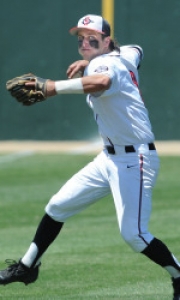 Adkison was previously chosen an Honorable Mention All-American by Perfect Game while Sheehan was honored as a 2017 Third Team All-American by Collegiate Baseball. Both were named to the All-Mountain West first team this past season with Sheehan also picking up the league’s Tony Gwynn Co-Player of the Year award.

Adkison (Culver City, Calif. / Mater Dei HS) played primarily in left field for the Aztecs this past season. He batted .337 overall with 14 doubles, a triple, 15 home runs, 64 RBI and 43 runs scored in 56 contests. In addition to leading the team in home runs, RBI and walks, he was first in slugging percentage (.648) and on-base percentage (.445). His 15 home runs were the most by an Aztec since Chris Gwynn hit a school-record 19 over 89 games during the 1984 campaign. His 64 RBI ranks 13th on the SDSU all-time single season list as well.

Sheehan, who redshirted in 2016, picked up where he left off two years ago by hitting .344 with 17 doubles, a triple, seven home runs 54 RBI and 54 runs scored.  He batted .398 in conference play with 31 RBI and 32 runs scored, and ended the season ranked among the top 10 in 11 offensive categories in Mountain West play.