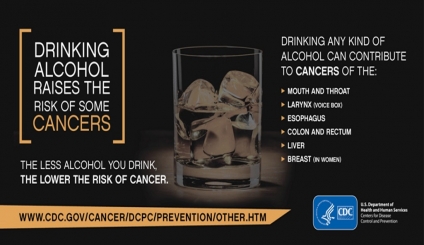 By David R. Shorey
East County Program Manager, Institute for Public Strategies
February 17, 2020 (San Diego’s East County) -- Let’s say you stop at a bar on the way home from work on Friday evening to take advantage of happy hour. You have a couple of beers or cocktails and that’s it. The next day you have a couple of glasses of wine with your Saturday night dinner and no more. Then during Sunday morning champagne brunch, you have a mimosa or two. Does that make you a problem drinker? Probably not.
But research shows that the more you drink, the more at risk you are of getting cancer. A direct link has been found between drinking alcohol and cancer risk, mostly cancer of the head and neck, the esophagus, and liver. Notably, breast cancer in men and women is also included.
While a majority of Americans might not be aware, there is a cancer connection to drinking alcohol, according to the American Cancer Society it is actually the third leading cause of cancer in the United States, following smoking and obesity.
At the county level, the County of San Diego Health and Human Services Agency reports that cancer was the leading cause of death in San Diego from 2012 to 2017. The good news is that overall cancer death rates have generally decreased since the turn of the century.
The National Cancer Institute reports more than one and a half million people across the U.S. are diagnosed with new cases of cancer every year and more than a half million of them die. Two out of five people will be diagnosed with cancer in their lifetime.
But there are easy steps you can take to reduce your risk of getting cancer. Perhaps the mimosa could be just orange juice instead, or a crafty alcohol-free mocktail. Maybe you have only one glass of wine with dinner or one beer or cocktail at happy hour. Every little bit helps because each drink consumed increases alcohol-related cancer risk.
If the drinking scenario described above became your weekly routine, you would be defined as a light to moderate drinker, depending on your sex and whether or not you drank alcohol on other days of the week as well. Even social drinkers have an increased risk of getting cancer. Another study by the County of San Diego Health and Human Services Agency examined alcohol consumption numbers by region and there is some encouraging news for the East County. Adults here were less likely to have engaged in binge drinking in the past month or year. Binge drinking is defined as four drinks for women or five drinks for men in one sitting.
The heads up about alcohol’s link to cancer is about self-awareness and unintended consequences. Social drinking can add up quickly and increase the potential to cause other harm.
According to the American Cancer Society, Center for Disease Control and Prevention and the American Heart Association along with other researchers, any amount of alcohol increases risk for cancer. And with each drink consumed, the risk exponentially increases. The important thing is that we become more aware of the risks so we can determine if they are worth taking.
We need to support more research and raise awareness of alcohol’s potential harm. We need to reconsider alcohol’s involvement in holidays like Cinco de Mayo, the Super Bowl and St. Patrick’s Day and turning them into drinking days. We need to reduce the amount of advertising that glamorizes drinking and cut down on bar and retail promotions that encourage drinking more and at reduced costs.
One of the most effective approaches to reducing excessive drinking and its many health and social consequences is to limit the physical availability of alcohol. Those who drink already, drink more when exposed to ads. The alcohol industry significantly expands its impacts on communities through its marketing approaches to purchase more alcohol drinks and drink more.
Most importantly, we need to keep alcohol away from kids and delay that first drink as long as possible. We live in a drinking culture. Let’s be smart about it.
-------------------
Institute for Public Strategies East County Project is funded by the County of San Diego Health and Human Services Agency