April 7, 2022 (Lemon Grove) -- Hunter’s Nursery, located in Lemon Grove, California, was started in 1919 by Howard Hunter. He began by running an orchard, growing lemons and oranges. It has been in the Hunter family all 103 years.

Kendall Rhodes is a fourth-generation owner of the nursery, along with her dad. Rhodes explained that the nursery has a wide variety of ornamental plants for the yard. They also have a huge selection of house plants, along with cactuses and succulents. Many customers are now trying to grow their own food, so the Nursery now specializes in fruit trees and vegetables. They also feature a variety of roses, in a wide range of colors and sizes.

"Roses are fun to grow and fun to have as a part of your garden!” Rhodes told us.

Guy Hunter, who now runs the nursery with his daughter Kendall, shared that it was his grandfather who started the nursery. Over the years, what they offered has changed. Hunter's grandfather began growing only trees, that they delivered by horse and wagon in the early years. 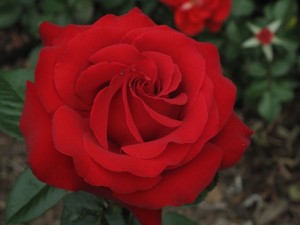 Part of Hunter Nursery's competition includes big-box stores, such as Home Depot and Lowes, according to Hunter.

“The plants change with the desires of our customers and seasons,” he said. For instance, the nursery has had roses for a long time because customers love them. Guy Hunter told us that his favorite part of working at the nursery was to be outside and decorating the nursery as well. The favorite items he sells are roses because they bloom year round and have gorgeous colors.

Over the last hundred years, the nursery has survived in part because other nurseries have closed. The family now has plenty of customers to keep them going.

Hunter finished by telling us that theirs is a very small business which depends on customers sharing and referring the nuresry to others.

"Small independent nurseries are just about gone," he said, voicing thanks for the many regulars who have helped the business bloom and thrive, more than a century after it took root.