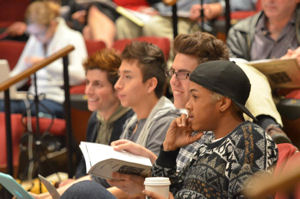 April 21, 2012 (San Diego) -- When you think of an audition, you probably imagine scores of actors vying for a precious few roles. But at the annual Actors Alliance of San Diego’s All City Auditions, held on March 26 at Old Town’s Cygnet Theater, a rare opportunity was provided to approximately 135 professional actors countywide to show what they had to offer to more than 60 local directors who were casting for upcoming projects.

Kevin Patterson, owner of the Academy of Performing Arts in La Mesa, is co-chair of the AASD. This year marks the 25th anniversary of AASD, which was founded at a time when San Diego didn’t have nearly the amount of theater it has today.

The organization began in 1987 as a co-op for actors to bring in artistic and casting directors from other cities who could provide paying work foractors, and an event known as the Regional Auditions was born. However, a boom in the last several years in San Diego’s theater landscape meant local actors no longer had to leave their home city to find paying work--and the Regional Auditions was replaced by the All City Auditions.
“[AASD] really evolved into an organization that’s a central hub, not only for the actors in town, but also theaters in town that want to find the actors,” said AASD communications director Shauna Ostrom, who also said she hears success stories every year of actors receiving work from the All City Auditions. “It’s become a huge connection for those in town that want to work and those offering work, and bringing them together to produce some amazing theater in San Diego.”
Those auditioning ranged in age from children to senior citizens, with all age groups represented in between. To qualify for the audition, one had to 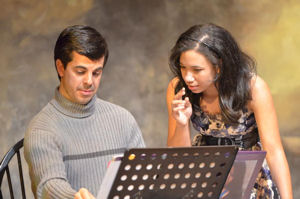 be either a member of Actor’s Equity, or a member of  AASD who had also had taken part in two paid productions. Participants were asked to prepare two contrasting monologues, or a monologue and a vocal piece if they wanted to be considered for musical theater.
Auditors received a compact disc containing the headshots and resumes of those who auditioned. It was an effort on the part of AASD to go green--in past years, actors had to submit 65 hard copies of their headshot and resume. The auditors hailed from diverse organizations such as the Coronado Theater, Diversionary Theater, La Jolla Playhouse, Lambs Players Theater, La Jolla Playhouse, and the Old Globe. Agents, freelance directors, production companies, and even representatives from Legoland and a singing telegram company were also in attendance.
“I think the talent was magnificent,” said Wesley Mitchell of the commercial production department of San Diego’s Fox 5 news. “I think we had the opportunity to see a tremendous range today. It’s always amazing to see how much local talent we have here in San Diego: singers, dancers, actors, film, stage television. It’s quite a nice range, and we like to provide opportunities for local actors whenever possible. It’s always nice to have an event like this where you can see so many.”
“I definitely refer back to my notes and the headshots that I’ve seen,” said Marike Fitzgerald, casting director for La Jolla Playhouse. “Especially non-Equity people, because I don’t see them as much. This is a really great place to see them, as well as people that are new to San Diego.” 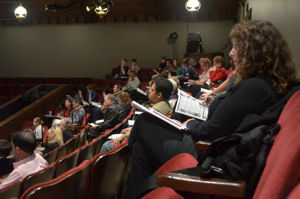 Although the participating actors were veterans of auditioning, many had never been to an audition quite like the All City. “I haven’t been to something like this where it’s kind of more like a showcasing of yourself,” said Samantha Ginn, who is part of a theater company called Circle Circle Dot Dot, in residence at the La Mesa-based studio Academy of Performing Arts. “I’m used to just auditioning for a play. So this will be neat.”
Actor Daryl Morris, who has experience in television, movies, commercials and stage, said he had never been to anything “so structured in one day. And it’s kind of cool--just boom, you do your thing, you leave.”
“I would hope I made an impression on someone,” says Michael Adler, who after leaving the corporate world when the recession hit decided to follow his dream and reinvent himself as a professional actor. “If I could do it one more time I would do it one more time.”
In addition to the All City Auditions, AASD runs a musical theater intensive program for youth performers. AASD is also starting a musical theater program at the Academy of Performing Arts.
Still, Ostrom would like to see AASD grow in the years to come. “We would like to expand it to have a marketing director, to have someone full-time in education and hire someone as our executive director,” says Ostrom, who runs AASD with the help of her identical twin sister, Shelly Breneman. “And that is the goal as we grow and change...when those things happen we can expand into the larger organization we would love to become.”