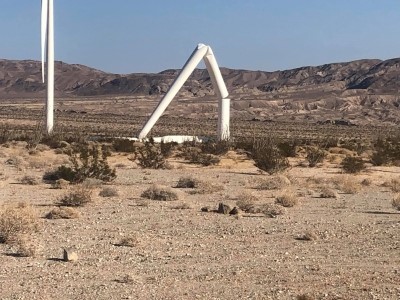 December 9, 2021 (Ocotillo, Calif.) – All turbines at the Ocotillo Wind Energy Facility have been offline in a since September 20, when a massive wind turbine collapsed, as ECM reported. The California ISO’s Dec. 8  Curtailed and Non-Operational Generator report, the shutdown of more than three months is listed as “forced.”

Neither Pattern Energy, operator of the wind facility, nor the U.S. Bureau of Land Management which owns the land where the wind facility is located responded to ECM’s emails asking when the turbines might be operational again and what steps are planned or perhaps mandated to protect public safety in the future.

This is the latest in a series of grave safety incidents and shutdowns at Ocotillo Wind.

Another turbine collapsed back in 2016 at the project, which was built on public land owned by the Bureau of Land Management, as ECM reported, prompting an inquiry by State Senator Ben Hueso. The manufacturer, Siemens, blamed that failure on a malfunction that resulted in a blade striking the tower, but has a long history of turbine failures.

Ocotillo Wind, built by Pattern Energy, also had a wind turbine fire in January 2015 and an 11-ton blade hurled off onto a public trail in May 2013, among other mechanical failures,  as ECM reported. The project has around 112 turbines in total.  An ECM investigation after the blade fell off prompted a worldwide curtailment and found the company’s history riddled with allegations that also included bribery, corruption and other scandals.

In 2014, ECM revealed that an international wind expert concluded that the project’s developers had defrauded the federal government to pocket subsidies, falsifying data to imply the site had higher wind speeds than exist in Ocotillo. Then-Congressman Bob Filner warned the Treasury Department about the fraud allegations and suggested the project should be halted. The California Native American Heritage Commission also found the project was on sacred sites and urged then-state Attorney General Kamala Harris to sue the federal government to halt the project, but she cited a conflict of interested and no filing was done.  Native American tribal leaders implored then-President Obama to stop the project, but it proceeded.

In records pulled by ECM for the first three years after the project was built, it had failed to produce the amount of promised power each year.

Residents of Ocotillo have been subjected to perils resulting from the wind project beyond blades hurling off and turbines collapsing. Stripping bare topsoil has led to massive dust storms and chemicals used to control dust resulted in potentially toxic white sludge flowing through the streets during storms – a substance that becomes flammable once it dries out, as ECM reported.

The project stands, silently for now, as the epitome of a green energy gone wrong – built in an area without adequate winds, with a history of serious mechanical failures including turbine collapses, a blade whirling off, and a fire – all without producing the power that it promised.

there is a new owner.....https://ocotillowind.com/.....or they just changed their name. on wednesday march 16, 2022 there were many of the turbines turning at the site. maybe it is back on line?

There are much better alternatives to produce energy besides industrial wind and solar farms.   They destroy the environment in order to "save" it.   Very sad!