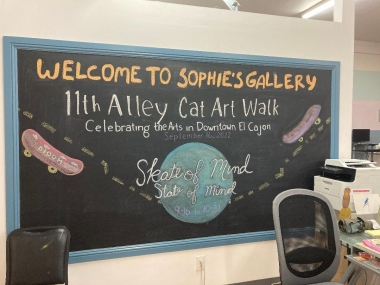 September 25, 2022 (El Cajon) -- The Alley Cat Art Walk was held on Friday, September 16, in El Cajon’s Arts District and featured many artists who represented East County in all its diversity.

This art show is a family friendly free community event that has been running for 11 years, with the goal of bringing awareness of the arts in downtown El Cajon. Several art galleries, a museum and small businesses participate in it every year bringing music, food, wine, fine art crafts, and art vendors to show the residents of El Cajon what is available to them. 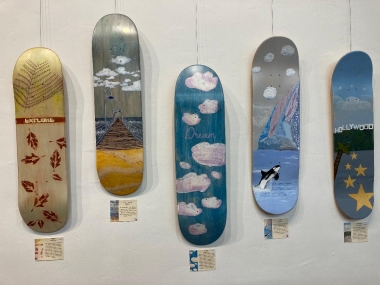 Studio C was one of the galleries showing off paintings and drawings had and an exhibit featuring 1950’s fifties modern furniture. White Sage was also open featuring sculpture by artist Diane Keltner.

The East County Art Association, which is a local non-profit, also had its membership show as a part of the Alley Cat Art Walk. The president of the East County Art Association, Linda Baltodano, has been a mural artist for 22 years. She spoke with ECM about their presence at the annual art walk, where the organization offered a theme based off impressionism. The nonprofit featured several of their artists including Salah Jamil, Toby Ecriva, Sandra Seckinggon, Ginny Sywyj, Patrica Isinkaiye, Mauren Kerr, Kameron Burns, Annette Cirillo, Cherise Goode, Bems High Tide--all East County artists.

“Art is a way to cope with society and at the same time be able to train yourself and discipline yourself,” Baltodano told ECM. “It’s great to see how proud they [artists] are of their creation.” 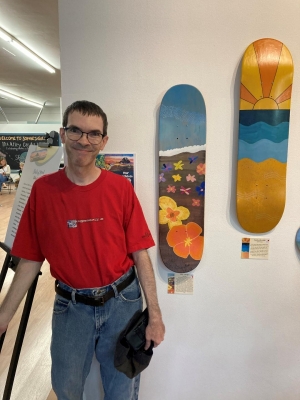 The organization that she leads was established in 1986 and opened its gallery in February of 2020. Baltodano stated that they had been closed for two years, right after leasing space for their gallery, and that they are happy to finally be open.

It has been challenging because some of the organization’s members passed away due to COVID-19. The East County Art Association’s goal to welcome all ages and cultures, having members in the association as young as 16 and as old as 89. Baltodano feels that artists from all over the world bring in their own unique style and she wants artists from all walks of life to feel welcome into their gallery.

“My goal is to help the new generation to keep themselves motivated and creative,” she says, “because the pandemic has caused many mental health issues.” She said she wants young people to be able to express themselves.

Baltodano said that a few of the association’s artists sold some of their pieces including a print, some coasters and greeting cards at the art walk this year. She said in previous years, artists would sell paintings but it has slowed down because art isn’t a necessity. 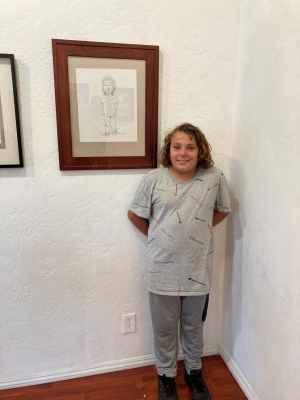 Before the Covid-19 pandemic hit the county, the Alley Cat Art Walk was held in a small little back alley behind the row of galleries that neighbor Sophie’s Gallery. Baltodano stated that back when the Art Walk was held in the alley, there was more exposure for artists because it drew in a higher volume of artists. “It creates more of the atmosphere of the ‘Alley Cat’ that was the benefit of having it there. Now it’s just five galleries. I hope that they will have it in the future back in the alley,” said Baltodano.

Sophie’s gallery was another featured gallery at the Alley Cat Art Walk. The gallery is affiliated with St. Madeleine Sophie’s Center, which has a mission is to help adults with intellectual disabilities and developmental disabilities realize their full creative potential by giving them the appropriate tools needed to develop such skills. Their main exhibit was a series of hand-painted skateboards. ECM interviewed one of the center’s artists, Joel Clark.

Clark spoke with ECM about his inspiration for his piece, which is from the flowers located in the Anza desert. “I like the flowers in the desert; never been to the desert before, wondered what it would be like to be there and see those flowers up close and personal,” he told ECM. When asked if he skateboards, he responded, “I would love to, but I don’t have very good balance.” 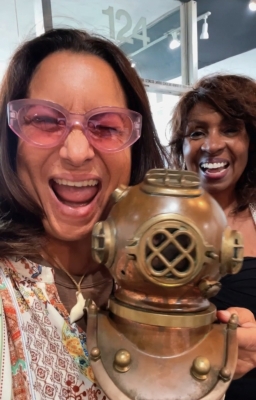 In the annex of Sophie’s main gallery, a small selection of art from Johnson Elementary was featured. An art teacher from an elementary school, Lauren West, framed her students’ art pieces and brought them to be featured at Sophie’s Gallery this year. One of her students is a young boy by the name of Christian Hernandez, who drew a self-portrait that was out on display in the gallery. He told ECM that he plans on pursuing art when he gets older.

The selection process for each artist featured is determined by each gallery that participates. The Alley Cat Art Walk was supported by County of San Diego Enhancement Program, Downtown El Cajon Business Partners and St. Madeleine Sophie’s Center. 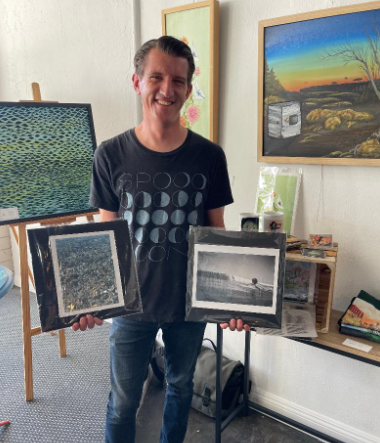