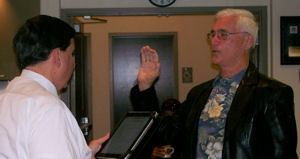 March 30, 2012 (Alpine) -- The Alpine Fire Protection District (AFPD) Board of Directors has appointed a new Director to fill the seat vacated by long time Director Ron Fuller. Ron Fuller was forced to resign from the Board at the February 21 Board meeting due to health reasons. At the March 20 Board meeting, the AFPD Board selected Jim Archer out of five people who expressed an interest in filling out Fuller’s term on the board.

The vote by the Board to fill the seat came after four previous votes failed to get a majority needed. On the fifth vote Mr. Archer was appointed by a vote of 3 to 0 with one abstention, cast by Director Kramer. Mr. Archer’s seat will be up for election in November, he and the other candidates can run in the election for a new four year term.

Mr. Archer is also currently a member of the Alpine Planning Group, serving as Chairman of the Parks and Rec’s sub-committee. He is an active member of the Alpine Kiwanis and The Knights of Columbus. The other candidates were: Mary Fritz, Chuck Taylor, David Todd and Brent Wolf. All five made oral presentations to the AFPD Board. Most of the candidates expressed a desire to run for the seat in the November election.
In other business, Firefighter Scott Champlin was promoted to Engineer and had a badge pinning ceremony. Engineer Champlin took an oath of office from Alpine Fire Chief Bill Paskle and had his new badge pinned to his shirt by his wife Julie. 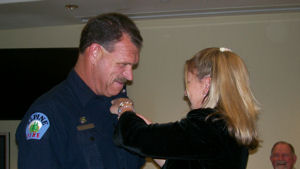 Engineer Champlin began his career with AFPD on September 5, 1994 as a cadet firefighter. He is the only firefighter the District has sent to paramedic school to be trained as a paramedic. All other firefighters since the paramedic program was started have been hired as paramedics. He has served as Chairman for the annual Fire Department Open House for several years, donating countless hours to the event. He has served as an officer for the Alpine Firefighters Association having served as vice president and secretary/treasurer. He also volunteers his time as a Little League coach. He and his wife Julie have two children, Jenna and Marshall.
The promotion was due to the retirement of Engineer Cliff Crane in February after 30+ years of service. The District is currently accepting applications to fill the firefighter position of Engineer Champlin. Applications will be accepted until March 30.