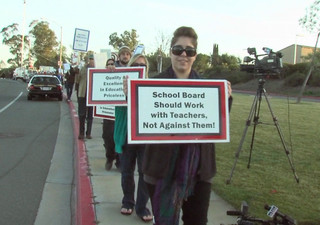 February 25, 2014 (Alpine)—Alpine teachers approved the new contract this morning after marathon negotiations with the Alpine Union School District, ending a strike that began last  Thursday. There are no details of the agreement to be found on the school district website. The contract is not all that teachers wanted, but according to a post at the Alpine Teacher Association website, the Union received the following:

·         A built in salary increase, based on Governor Brown’s budget and “gap funding”

This actually is two percent less of a cut than the contract they were originally offered. Also if the State of California restores education funds on July 1st, to the tune of 28%, so teachers could see further restoration in salaries.

This is the first teacher strike since 1996 in the County of San Diego. Teachers expressed happiness to be back in the classroom.

Thank you Alpine parents for allowing us to work through complicated salary and benefit issues with teachers. Next step: FOCUS on Learning

He also thanked the substitutes who took over the classrooms during the walkout:

Principals and Classified Support Staff: Thank you for your tireless work during the strike to be support our students. You are the AMAZING!