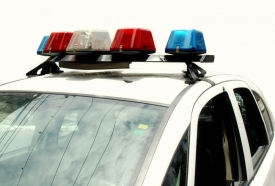 November 7, 2015 (La Mesa) – A man armed with a rifle similar to an assault weapon entered the AM/PM gas station at 3775 Massachusetts Avenue in La Mesa at 1:25 a.m. and demanded cash.  After the clerk turned over money, the suspect left on foot and was last seen running eastbound on Waite Drive, according to La Mesa Police.

The suspect is described as a light-skinned black male adult in his 20s, approximately 5’9” tall, with a thin build. He was wearing a blue and gray hooded sweatshirt, blue jeans, and a baseball cap. The suspect also wore dark sunglasses and had the hood of his sweatshirt up over his head.