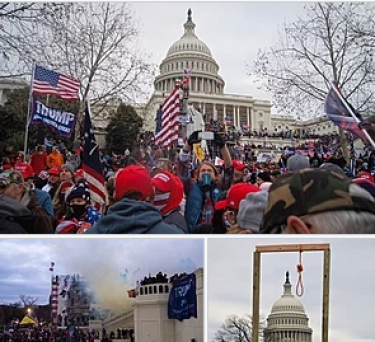 Jan. 5, 2022 (Washington, D.C.)  --  January 6, 2021 will be commemorated in the nation’s history books  as the date when thousands stormed the U.S. Capitol while the US Senate was preparing to certify the electoral count from the November 3, 2020, election. Five people died during the violent insurrection and 140 police officers were injured, ABC News reported.

In a speech today, U.S. Attorney General Merrick Garland stated, “The actions we have taken thus far will not be our last.” He added, “"Those involved must be held accountable, and there is no higher priority for us at the Department of Justice."

"The Justice Department remains committed to holding all January 6 perpetrators --at any level--accountable under law, whether they were present that day, or were otherwise criminally responsible for the assault on our democracy. We will follow the facts wherever they lead."

Election fraud claims made by then-President Donald J. Trump, repeated on social media and conservative news shows, whipped his followers into a frenzied belief that the election had been stolen. Over 60 judges found no evidence of fraud in the many lawsuits filed, including several judges appointed by Trump, Politifact confirmed. Yet in a fiery speech last January 6, Trump told followers he’d invited to Washington D.C. to “walk down to the Capitol” falsely promising to go with them. “You will have an illegitimate president,” he told them, “And we can’t let that happen.”

In the ensuing mayhem, besides the deaths and injuries that occurred, assassination threats were made against leaders of Congress and against Vice President Mike Pence, who refused to intervene and stop what he believed was a lawful counting of the votes. A gallows was erected outside the Capitol, with some in the crowd chanting “Death to Mike Pence.” 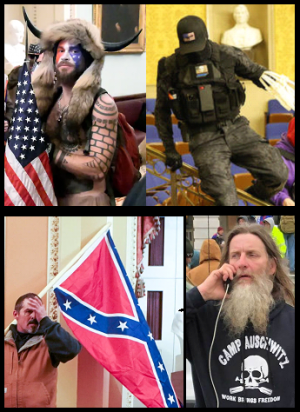 One year later, as the nation prepares to commemorate the grim anniversary, hundreds have been charged and some sentenced—including several with San Diego ties. Many cases remain pending and some suspects remain unidentified.

A  House select committee is ramping up its investigation into the insurrection, while calls mount to hold any officials responsible who may have abetted or incited the violence – potentially including lawmakers and/or former President Donald Trump.

To date, federal prosecutors have charged 725 people related to the attack, including 75 charged with using a deadly or dangerous weapon against police officers, the Washington Post reported on Dec. 31. So far, 70 have received sentences ranging from probation for non-violent offenders to several years in prison for those who assaulted police officers. One of the most visible insurrectionists, “QAnon Shaman” Jacob Chansley was sentenced to 41 months for his role in the invasion.

But the most serious cases have not yet come to trial.

Among the most serious is the case against  17 members of the Oath Keepers accused of a conspiracy to overtake the capitol and disrupt a Congressional proceeding as the Senate certified Joe Biden’s election as president. One member of the Oath Keepers, an anti-government militia group, has pled guilty and is cooperating with prosecutors, NPR reported.

Both the Oath Keepers and Proud Boys, another extremist militant group, also face a civil lawsuit filed by Washington D.C., which calls the attack “a coordinated act of domestic terrorism.”

Former President Donald Trump has also been hit with two federal lawsuits filed by law enforcement officers who allege that Trump directed, aided and abetted the assault and battery that injured the officers. 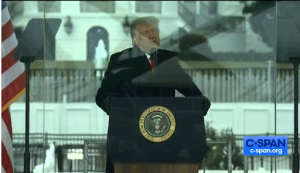 Will Trump, his allies, and funders of the attack be held accountable?

Republican Congresswoman Liz Cheney, a member of the select committee investigating the insurrection, believes so. Moreover, she points to evidence that Trump watched the violence unfold on TV, repeatedly rejecting pleas from his own children, Don Jr. and Ivanka, as well as calls from legislators and conservative TV hosts, who all urged him to ask his supporters to stop the violence. Yet he refused for hours, while 140 police officers were injured, five people died, and an estimated $1.5 million in damage was done to the Capitol.

“He crossed lines no American president has ever crossed before,” Cheney said on ABC’s “This Week” just days ago. “When a president refuses to tell the mob to stop, when he refuses to defend any of the coordinated branches of government, he cannot be trusted.” Cheney emphasizsed that Trump “refused to send help, refused to tell people to stand down for multiple hours while that attack was underway…The Republican Party has to make a choice. We can either be loyal to our Constitution or loyal to Donald Trump, but we cannot be both.”

Could the former President face not just civil liability, but criminal charges for his role in the January 6 attack on the Capitol?

Congressman Bennie Thompson, Chair of the House select committee, told ABC’s George Stephanopoulos that the committee is “obligated” to report any crimes it uncovers to the Justice Department. “If we find it, we will absolutely make the referral,” he said, but made clear that could include people in the executive and legislative branches, as well as wealthy individuals financing a scheme to undermine democracy. It was clearly, what we believe based on information we’ve been able to gather, a coordinated activity on the part of a lot of people.”

The committee among other things is investigating a “war room” at the Willard Hotel in Washington D.C. run by Trump allies Steve Bannon and Rudy Giuliani the day of the attack. Bannon has been charged by the Justice Department with failing to cooperate with the committee.

Several who stormed the Capitol were San Diego County residents or former residents. 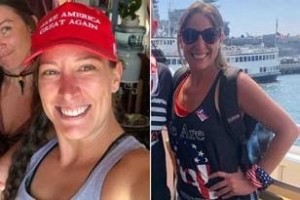 The late Ashli Babbit, who formerly lived in Lakeside and was associated with a business in Spring Valley, was fatally shot by a Capitol police officer while climbing through a broken window in the Capitol interior. Though some dubbed her a martyr, Babbit had  a history of violence, threats and conspiracy theories, AP reported.

The police officer who shot her was found to have acted justifiably.

According to the Point Loma OB Monthly, an Ocean Beach man, Philip Weisbecker, was charged with violent entry to the U.S. Capitol during the siege.

Jeffrey Alexander Smith of Coronado pled guilty to a misdemeanor for taking part in the insurrection according to Times of San Diego. He is set to be sentenced on Jan. 21.

Erik Herrera, who grew up in Sa Diego, was indicted Oct. 6 by a grand jury on charges of knowingly entering or remaining in a restricted building, obstruction of an official proceeding, and more.

The FBI and ATF are offering a $100,000 reward for information leading to the arrest and conviction of the person who planted two pipe bombs near Democratic and Republican headquarters the night before the insurrection, as ECM reported.

Multiple events have been scheduled to remember and honor those who died including multiple US Capitol police officers from their injuries or suicide as well as rioters.

U.S. Speaker of the House Nancy Pelosi announced a prayer vigil will be held, as well as testimonials from lawmakers and a discussion with historians. All members have been invited to participate.

President Biden plans to address the nation  January 6 including a warning about continuing threats to our democracy.

Former President Donald Trump, who is campaigning to run for president again in 2024, cancelled his previously announced plan to hold a press conference on January 6.