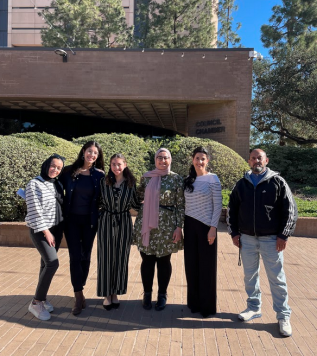 By Elijah McKee
“It is unfathomable that a community hasn’t changed in five years.  This is a form of voter suppression, by dividing a community that can and should be kept together.” –Jeanine Erikat, Policy Associate at the Partnership for the Advancement of New Americans
February 15, 2022 (El Cajon) — The City Council of El Cajon unanimously chose its Council districts map last Tuesday night, February 8. The decision, as part of decennial redistricting, determined how the City will elect council members for the next ten years.
Instead of drawing new district lines, the Council voted to keep the same boundaries drawn up in 2017, despite sharp criticism from El Cajon’s large Arab-American community, whose leaders argue that their population has changed since five years ago. They asked for updated districting to create a fair and complete representation of El Cajon.

Advocates from this community, which includes many immigrants and refugees, held a press conference before speaking at the City Council meeting. They stressed the importance of attentive redistricting, citing the facts that their community remains uncounted by the U.S. Census but has undergone rapid change, such as the recent surges of Afghan refugees settling in El Cajon. 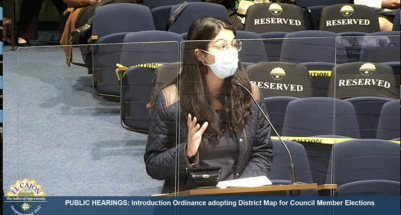 “It is unfathomable that a community hasn’t changed in five years,” said Jeanine Erikat, Policy Associate at the Partnership for the Advancement of New Americans. “This is a form of voter suppression, by dividing a community that can and should be kept together.”
Erikat also voiced concern that not changing the district lines serves to benefit the incumbent councilmembers, and worried that they were biased to just go through the motions of community input.
“We’re not here to create problems,” she said, “we’re here because we want to participate.”
Representatives from the Majdal Center, a San Diego Arab resource and community center based in El Cajon, also addressed the press. One of the maps available for choosing — Map 112 — was created by the Majdal Center with help from a demographer, to better reflect the Arab community.
During the City Council meeting, these organizers tried once more to sway councilmembers to choose their map, alongside residents who wished to see their district better aligned with their community. However, it seemed budging any of the City Council would be an uphill battle —hitting a virtually vertical wall.
“This does risk violating both the expectations and the spirit of The Fair Maps Act, which is intended to protect the communities of interest we’ve been talking about,” reasoned Ramah Awad, Steering Committee Chair of the Majdal Center, during the in-person meeting.

Awad implored the City Council to at least use the population research they had completed to make Map 112, even if they did not select it.
“We are not in the 2017 data, we are not in the 2010 census,” she said. “We have offered you data to say this is where our community lives, this is where we work, this is where we spend our time.”
When it came time to vote, City Manager Graham Mitchell showed the current map — Map 100 — versus Map 112. He posited that the population changes were simply not large enough to redraw any lines, and that El Cajon has exceeded requirements for full compliance with the Fair Maps Act. 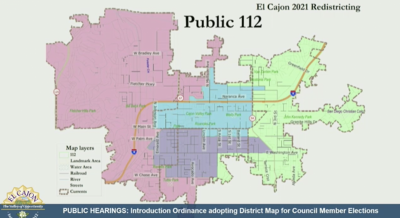 He also noted the need for compact districts so as not to potentially gerrymander.
“Many of the maps submitted through the process did not meet that compactness measure,” he said, arguing for the viability of Map 100 over Map 112.
“I think the current map is still a great choice for keeping communities of interest together,” agreed Councilmember Steve Goble, citing other groups that needed to be balanced into the voting protections discussion. The city also has a large Latino population, for example. 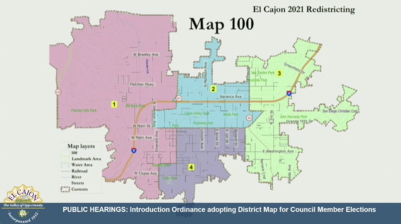 Yet Awad’s question from public comment still hung in the air: “Why open up the process for public comment,” she asked, addressing the City’s unbudging standpoint, “and go through the hiring of the National Demographics Corporation, if you weren’t planning to address any of the current boundaries?”
Similarly, Majdal’s Advocacy Coordinator Yasmeen Obeid reflected on the City Council’s commitment to represent all El Cajon residents, in light of what she described as unresponsiveness to her attempts to get in touch.
“That shows that you do not represent us, unfortunately,” said Obeid. “And it’s very disappointing, because we really wanted to engage with you in this process.”
The Arab-American community isn’t the only population group to voice dismay over the Council’s redistricting choices in recent years.
The Council voted in 2017 to adopt new boundaries that included a majority-minority district for Latinos.  Many in the Latino community had looked forward to an open seat to choose their own representative in a city with more registered Democrats than Republicans.
However, the all-Republican Council appointed Phil Ortiz, a Republican who lives in the newly created district, to fill a vacancy on the council, sparking criticism from some Latino activists. In 2022, Ortiz is expected to seek reelection in the predominantly Latino district, raising questions of whether partisan politics may have played a role in recent redistricting decisions.
The Council has previously appointed an Iraqi-American woman, Star Bales, a Republican, and had an elected Iraqi-American member, Ben Kalasho, who later resigned.

wells is a racist!!