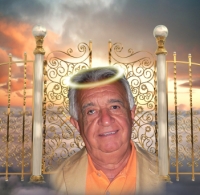 April 1, 2010 (La Mesa) -- La Mesa’s long-time Mayor Art Madrid has signed a pact with the powers that be to remain the Mayor of La Mesa for eternity. Rumors that his political career is dead are unfounded. Madrid will still be mayor even after his earthly demise, St. Peter confirmed in an exclusive interview with East County Magazine.

The five-term mayor has learned the secret to re-election – smile, shake hands, remember names and every October throw a huge party with ample libations for all. In his terms in the hereafter, he pledges to turn water into wine and keep everybody even happier.

“Now that I have the formula down, I’ll never lose, so it seemed reasonable to take my public service to the next level. In fact, during negotiations, St. Peter said he’s looking forward to a little help with the name-remembering part,” said Madrid.

Having served on over 125 boards and commissions during his tenure of public service, Madrid has a knack of staying awake when others drop off during meetings.

“That’s another skill that will come in handy serving as Mayor in heaven,” said Madrid. “I have it on Biblical authority that there is no night there and no need for sleep.”

That’s actually getting double the governing that any other candidate could offer.

One of his goals in heavenly rule is to expand his famous program initiated in 1994 of publishing the names and photos of individuals arrested for prostitution in La Mesa.

“In the afterlife, I’ll have a much better knowledge of who is a sinner and who isn’t. Why not publish the names and photos of everyone in hell?” said Madrid. “I think it will serve as a deterrent.”

Speaking of hell, Madrid was asked if his eternity term will extend to those La Mesa voters who have died and gone into the lake of fire. Will they still vote?

“If they are in hell, they probably didn’t vote for me in the first place,” said Madrid. “In fact, I tried to work a deal with the devil, but another East County mayor had that one all sewed up.”