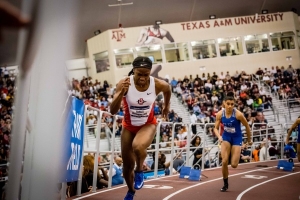 Henderson's time was just 0.03 off the NCAA record

March 10, 2018 (College Station, Texas) - Ashley Henderson shattered the school record she set yesterday in the 200 to finish in second place at the NCAA Indoor Nationals. She also took fifth in the 60 meter dash, marking the second consecutive year she has finished in the top five in both the 60 and 200.

“I’m so happy right now!” Henderson exclaimed. “I can’t believe I just did this. I’m extremely proud of myself and so grateful for my coach. Coach Burrell is an amazing coach and I’m so proud to call her my coach!”

Running in the first heat of the 200 finals, Henderson finished in 22.41, which set a facility record and was just 0.01 seconds off the collegiate record set by Oregon’s Bianca Knight in 2008. However, Harvard’s Gabrielle Thomas bested Henderson with a time of 22.38 just a few minutes later in the second heat, which set a new collegiate record.

“I am so proud of Ashley!” praised Head Coach Shelia Burrell. “We were disappointed after the 60 because we both know she was prepared to run better. Watching the 200 was intense, but waiting for the second heat was even more intense. I told her to shake off the 60 and make the rest of the field come catch her if they can and to be ready for how fast she would come off the last bank. We barely missed the collegiate record, but walked away with a big personal best!”

Henderson, who had the eighth best time in the 60 yesterday, earned a fifth place finish with a time of 7.20. It is the second straight year Henderson has finished in the top five in the 60 meter dash. LSU’s Aleia Hobbs took first while setting a collegiate record, finishing in 7.07.

Henderson’s top five finishes earned the Aztecs 12 points, which tied them for 17th place (out of 54 schools) in the overall team scores.

While Henderson and Draxler were wrapping up the indoor season in Texas, the rest of the Aztecs kicked off the outdoor season back in San Diego, competing at the San Diego Collegiate Challenge at UC San Diego. The Aztecs finished in fifth place despite sending just ten athletes.

Ashley Henderson and Gabrielle Thomas were the only non-SEC runners competing in the finals of the 200 and ended up finishing first and second. Their times are now the top two ever run at the Gilliam Indoor Track Stadium

“Ashley leaves as an All-American in two events and a big smile on her face. I’m happy and proud of her because I know how much she gave me in training this indoor season. Now we look forward to outdoors. It’s a good day to be an Aztec!" – Head Coach Shelia Burrell

The Aztecs will continue their outdoor season at the Ross and Sharon Irwin Collegiate Scoring Meet at Point Loma next Sunday.

Team Scores (Out of 54 schools)