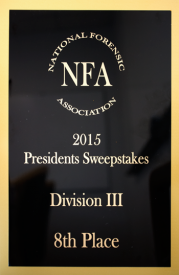 In addition, senior debate partners Giovanni Herrera and Alexander James were the first duo from SDSU to ever reach the prestigious National Parliamentary Tournament of Excellence to compete against the top 64 teams in the country. They finished an impressive 21st place in the elimination-style competition that featured several rounds of match-ups between two teams, which debated about a current social issues for 40 minutes.

“I was very pleased to see these seniors go out arguing the things they wanted to, because that made it more than just a game of intellect but more of a social movement,” said Daniel Iberri-Shea, director of Aztec Forensics.

The season for the forensics team lasts nearly the entire academic year, with a total of 27 tournaments that take place from September to April. After a long year of work, Herrera and James came into the final tournament with an official year-long ranking of 26th out of a total of 777 teams.

Herrera and James spend countless hours preparing for these tournaments including practice debate rounds, determining hypothetical arguments they may face, studying current events and even analyzing film of high-level debates.

“Results like these help a lot with attracting more people to be a part of this team because it looks fun and we are having success,” said Iberri-Shea.