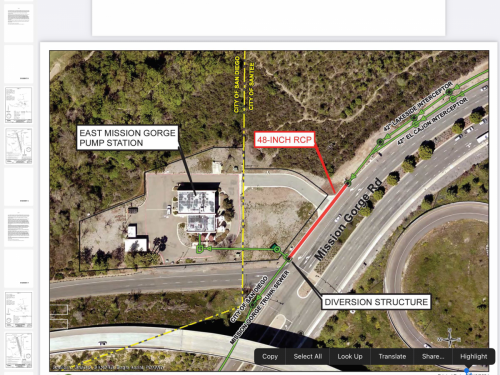 Earlier this month, the Joint Powers Authority for AWP filed a complaint in San Diego Superior Court asking the court to grant the JPA eminent domain rights for the station, located at the western border of Santee, on Mission Gorge Road next to the west-bound ramp for SR 52.

In May, the JPA, whose members are the Padre Dam Municipal Water District, the Helix Water District, the city of El Cajon, and the county of San Diego, took an initial legal step in declaring its intention of invoking its eminent domain powers, something rarely done when other government agencies are involved.

Kyle Swanson, AWP’s general manager who also manages Padre Dam Water District, said while the city and JPA are continuing to negotiate the transfer of the pumping station, the timing for construction at the site is critical to the estimated $950 million project. He added that further delays could result in needless additional expenses.

“We need to secure access to the pump station by September to October time period. The contractor we’ve hired for this part of the project is scheduled to begin work in November,” Swanson said.

The city and the JPA had agreed to the sale of the pump station in 2021. The transfer was supposed to occur at the end of last year, but sometime around November, the city had second thoughts and put the brakes on the sale, Swanson said.

The East County Advanced Water Purification program would capture and treat about 15 million gallons of sewage that is currently pumped to the city’s Point Loma treatment plant, producing about 11.5 million gallons of drinkable water or about 30 percent of the region’s need. The project has been in the planning stages for more than a decade, and last month had its official groundbreaking at Padre Dam’s site in Santee.

At the JPA’s May 20 meeting, San Diego’s second highest ranking employee, Chief Operating Officer Jay Goldstone told the board that the city is still willing to sell the pumping station but wants assurances that a seven-mile brine line is built first to ensure that any untreated sewage wouldn’t contaminate water going into San Diego’s system. San Diego is also constructing its own sewage reclamation plant in the Miramar area called Pure Water at an estimated cost of $5 billion.

Goldstone said the city would pay $33.6 million of the total cost for the brine line of about $40 million. Swanson said there’s been no effort by the city to change the terms of that agreement. He said he didn’t believe that there is any possible contamination to San Diego’s water resulting from the AWP project.

In a letter to Goldstone, Swanson said the two agencies are continuing to work on five agreements associated with the sale of the pump station, its operations, and the creation and operation of the brine line.

“While recognizing the complexity of developing and negotiating these five agreements, I am encouraged by the progress we have made over the course of our seven facilitated negotiation sessions and am hopeful that the City will be able to bring the agreements forward for City Council consideration by September/October 2022,” Swanson wrote.

He said the city delivered two of the five agreements to the JPA this week, which the agency is currently reviewing, and hoped the other three come in shortly.

However, the JPA is also concurrently pursuing a legal strategy to protect the investments of its member agencies and meet its target completion by the end of 2025.

“We’re doing everything possible to keep this $950 million project on track,” Swanson said.