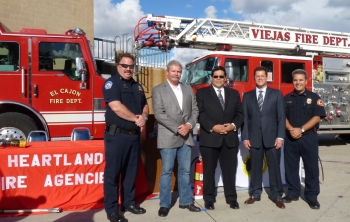 JPA is first in California involving a Native American tribe

October 18, 2012 (El Cajon ) – The Viejas Band of Kumeyaay Indians and Heartland Fire Training Authority this week announced that they have entered into a historic Joint Powers Agreement (JPA).

“This JPA finally allows Viejas to have a seat at the table and have a full and meaningful partnership with other fire agencies that we’ve worked with for years in a very productive way,” said Viejas Fire Chief Don Butz. “Ultimately, this benefits the entire region, since wildfires and other natural disasters do not recognize geographic, political or other borders. We are all stronger and better protected when we work and train together.”