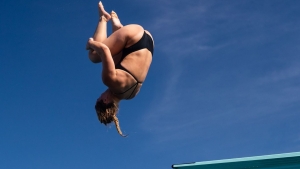 For the third consecutive day, sophomore Ximena Lechuga Gonzalez competed in the event's final rounds. The Tijuana, Mexico native finished 18th in prelims with a score of 216.85, and bettered her morning's performance in the finals, placing 13th overall with a combined score of 456.55 (finals score of 239.70 points).

Senior Marie Yacopino also competed alongside Lechuga Gonzalez in the finals after placing 17th in the prelims with a 217.20 point-performance. The senior held her position after the final rounds, earning 17th overall with a combined score of 428.10 (finals score of 210.90).