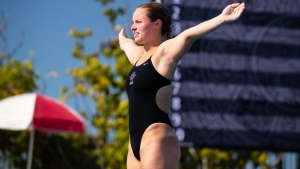 Yacopino broke the 300-point barrier and scored a season-best 302.45 points in the finals to earn the 1-meter title. Lechuga Gonzalez placed third with a score of 276.65 while senior Delaney Gallagher’s fourth-place effort of 275.20.  Six Aztecs finished in the top-10, with Lexi Letts, Gina Cazares, and Erica Sarver ranked sixth, seventh and ninth with scores of 257.55, 256.5, and 244.65, respectively. Gillian Garcia rounded out SDSU’s efforts, placing 11th with a score of 208.70.

Lechuga Gonzalez led the way for the Aztecs on the platform, finishing with a score of 246.15 to bring home the event’s title. Cazares collected second place with a score of 226, a career high. With their efforts, both Aztecs qualified for their third event at the NCAA Zone E Diving Championships. Yacopino snagged fourth place with her own career-high point total of 222.65, followed by Delaney Gallagher’s sixth-place effort of 210.85. Letts and Sarver finished seventh and eighth, respectively with scores of 195.1 and 190.35.