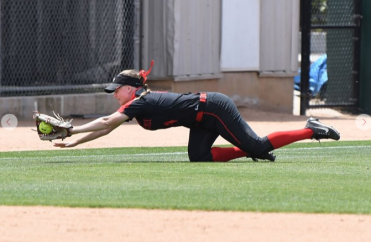 Scoreless through four innings, the Aztecs (24-24, 11-10 MW) loaded the bases in the bottom of the fifth before Shelby Thompson was hit by a pitch on a 3-2 count, which allowed Kristen Parker to trot home. Munoz followed with a double down the left-field line to score Aris Metcalfe and West Hills alum Katie Byrd. Shelby Thompson also scored on the play on a fielding error by Bulldog (33-18, 11-10 MW) left fielder Kaitlyn Jennings to give SDSU a 4-0 lead.

FS halved the lead in the top of the sixth when Vanessa Hernandez and Dolly Stevens scored on a pair of San Diego State throwing errors. With a runner on third because of the errors and one out, Aztec pitcher Marissa Moreno got out of the jam by getting Hayleigh Galvan to fly out to Kiera Wright in center field and Kelcey Carrasco to ground out to Thompson at shortstop.

Fresno State got a runner into scoring position with two outs in the seventh, but Moreno got Schuylar Broussard to ground out to Munoz at third base to end the game and complete the SDSU sweep.

Moreno (11-11) picked up the win after allowing two unearned runs on three hits in 2 2/3 innings of relief, while striking out two. Alicia Garcia started the game and gave up four hits and a walk over 4 1/3 scoreless innings, striking out two.

The Aztecs won their 27th straight game when leading after five innings (16-0 this season).