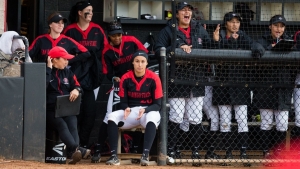 May 10, 2019 (Logan, Utah) - The San Diego State softball team was unable to overcome a rough start in a 7-6 loss to Utah State Friday afternoon in Logan, Utah. The loss dropped the Aztecs to 24-26 on the season and 11-12 in Mountain West play.

Unlike yesterday when SDSU left 10 runners on base in a 4-3 loss, including five over the first two innings, San Diego State wasted no time today getting on the scoreboard. Shelby Thompson and Kiera Wright each led off the game with back-to-back singles and scored on a double by Molly Sturdivant. Sturdivant advanced to third on a fielding error by Aggie (17-29, 6-6 MW) shortstop Lexi Orozco and then easily scored when Taylor Adams grounded into a fielder’s choice once again to Orozco.

USU, however, got to Aztec starting pitcher MJ James early as the first five batters reached base safely on three singles, a walk and a hit batter, leading to two runs. After Alicia Garcia replaced James in the circle, Erin Kuba singled up the middle to score two more runs and make it 4-3, Utah State. Still with no outs, Garcia went to work, striking out Allanah Alavarado swinging, getting Orozco to ground to Munoz at third base for a fielder’s choice and Mia Maher to line out to Wright in center field.

Utah State added to its lead in the second when Bailey Trapp’s single scored Stephanie Reed and, after a throwing error by SDSU, Kenzi Bolin as well to make it 6-3.

San Diego State closed the gap in the third on a two-run home run by Kelsey Munoz. It was the fourth homer of the season for Munoz.

The Aggies got one back in the fourth as Riley Plogger led off with a double and later scored on a two-out single by Bailey Lewis.

The Aztecs threatened in the fifth when Katie Byrd doubled with one out and got to third on Orozco’s second error of the game. With two outs, USU pitcher Delaney Hull got Adams to ground out to Orozco, stranding a pair of runners.

Utah State looked to extend its lead in the bottom of the fifth when Maher (single) and Reed (walk) each reached with two outs. Marissa Moreno replaced Garcia in the circle and struck out Plogger looking to get SDSU out of the inning.

San Diego State loaded the bases in the sixth with one out, but only scored one run when pinch runner Kayla Sok scored from third on a third fielding error by Orozco.

Aggie pitcher Kapri Toone, who relieved Hull (11-13) in the sixth, retired the Aztecs in order in the seventh to secure the win.

Thompson led the SDSU offense with two hits, a run and a walk, while Byrd also added a pair of hits.

James (3-8) took the loss after allowing four runs on three hits and a walk without recording an out. Garcia pitched the middle 4 2/3 innings, surrendering three runs (two earned) on six hits and three walks, while striking out two. Moreno pitched the final scoreless 1 1/3 innings, yielding two hits with one strikeout.

SDSU had its 12-game winning streak snapped when scoring at least six runs (8-1 this year).

The Aztecs had their second straight one-run loss and are now 12-7 on the season in one-run games.

West Hills alum Katie Byrd’s double was the 39th of her career, which is tied with Kayla Jordan (2012-15) for the third most in program history (teammate Molly Sturdivant ranks in a tie for fifth with 36).

The final game of the series is set for noon MT (11 a.m. PT) Saturday.