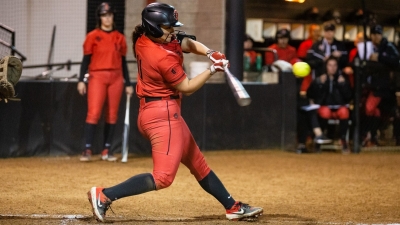 February 29, 2020 (San Diego) - San Diego State split a pair of games Saturday at the San Diego Classic at SDSU Softball Stadium. The Aztecs (13-8) opened with their second-consecutive one-hit shutout in an 8-0, five-inning victory over St. John’s before giving up five runs with two outs in the final inning to defending national champion and No. 1/1 UCLA in a 5-0 loss in the nightcap.

In the opener, SDSU recorded its second straight one-hit shutout in an 8-0, five-inning victory over the Red Storm (6-13), which had snapped San José State’s nation-leading 17-game winning streak earlier in the day.

Hannah Johnson picked off where Marissa Moreno and Maggie Balint left off Friday night in a 1-0 victory over Weber State by allowing a bunt single in the second inning, a walk and a hit batter, while striking out four. Johnson improved to 4-1 on the season with her second complete game shutout.

San Diego State, which had just one run and five hits over its previous two games, came out of an offensive funk against SJU with seven hits and a season-high nine walks.

Sadie Langlet had a two-run home run in the bottom of the first inning, while Sara Lillie had a sacrifice fly. The Aztecs scored their others runs on bases loaded walks by Makayla Jordan (twice) and Alexa Schultz, and a pair of errors.

Schultz and Shelby Thompson each were 1-for-1 with two walks, while Kiera Wright singled and walked. Jordan, making the first start of her career, had her first career RBIs with the aforementioned two walks.

In the nightcap, SDSU held the potent Bruin (18-1) offense at bay until the top of the seventh inning when UCLA scored on a two-out, two-run single and later added a three-run homer.

Schultz doubled for San Diego State, while Wright and Langlet each added singles.

The Aztecs wrap up the San Diego Classic with a game against CSUN at 2 p.m. on Sunday.