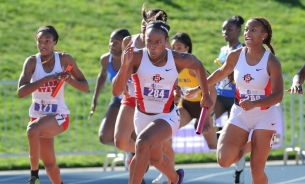 SDSU had seven top-three finishers on the day

April 28, 2017 (Irvine/Philadelphia) - San Diego State track & field won the shuttle hurdles relay, one of five top-three finishes at the prestigious Penn Relays, and had a successful performance in the opening day of the adidas/Steve Scott Invitational on Friday.

The Aztecs earned their first ever relay win at the Penn Relays on the backs of the shuttle hurdles team. In only the second time a group of Aztecs competed in the race, San Diego State’s shuttle hurdles team of Sierra Brabham-Lawrence, Micha Auzenne, Andrenette Knight and Kassidy Ellis won the event with a school-record 54.34 time, sprinting past South Carolina (54.40).

“I was just thinking, ‘try to stay tight’ because if I would’ve gotten long, (the South Carolina runner) would’ve caught up to me,” Ellis, the relay’s anchor, said. “I just wanted to stay fast and cross the finish line before her. It’s amazing to win. We don’t go out to huge meets too often, and it’s really nice to see a huge crowd cheering for us and everyone. I didn’t want to think about winning until I crossed the finish line, but I’m so happy.”

San Diego State also had a pair of second-place finishes in individual events. Henderson earned silver in the 100-meter dash after crossing the finish line in 11.41, just 0.03 behind race-winner Jonielle Smith of Auburn. In the 100-meter hurdles, Auzenne was second, finishing in 13.44, and Brabham-Lawrence was third (13.51).

After advancing to the College Women’s 4x100 Championship of America Invitational yesterday with a third-place finish, senior Starlynn Singleton, junior Simone Glenn, Auzenne and Henderson again took bronze. The group finished the relay in an impressive 43.76, missing their own school record, which they set last year at the NCAA Track & Field Championships, by just 0.21 second.

The Scarlet and Black took seventh in the 4x200-meter relay heats with a 1:36.57 time. As one of the top nine finishers, Singleton, Tyra Lea, Lisa-Anne Barrow and Rochene Smith advance to the Championship Invitational set for tomorrow at 2:20 p.m.

At the adidas/Steve Scott Invitational hosted by UC Irvine, junior Bonnie Draxler continued to dominate the pole vault field, winning her fifth pole vault title of the season and her third in four weeks with a 13-05.75 mark. Sophomore Marissa Berry finished second for the fifth outdoor meet this year (13-01.75). Meanwhile, in the 3,000-meter steeplechase, senior Elaine Ribeiro raced to a season-best 11:05.55.

Women’s Pole Vault (out of 19 entrants)

Women’s Long Jump (out of 38 entrants)

Women’s Hammer Throw (out of 33 entrants)