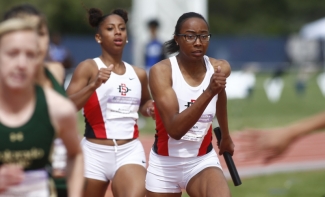 May 27, 2017 (Austin, Tex.) - San Diego State track and field produced seven qualifiers in three events to the NCAA Outdoor Track & Field Championships on the final day of the NCAA West Prelims Saturday, hosted by the University of Texas. The NCAA Championships occur from June 7-10 in Eugene, Ore.

Overall, San Diego State will send 10 student-athletes to the NCAA Championships in six events, its most representatives at the national meet since 2004 (12 in seven events). Junior Ashley Henderson will compete in the 100, 200 and 4x100, classmate Simone Glenn will represent SDSU in the 200 and 4x100, and senior Micha Auzenne will appear in the 100 hurdles and the 4x100. Junior Bonnie Draxler will take on the pole vault. In their first years as an Aztec, junior Rochene Smith, a transfer from Wayland Baptist, and freshman Andrenette Knight will compete in the 4x100 and 400 hurdles, respectively.

“We were a force this weekend,” head coach Shelia Burrell said. “This team showed up and showed out. I’m proud of all of the girls and the staff. Even the athletes that didn’t make it to Eugene competed with heart.”

After setting a school and meet record to qualify for the 100-meter dash yesterday, Henderson qualified in the 200 meters, along with Glenn. As a 4x100-meter relay team, Henderson, Glenn, Smith and Auzenne secured a trip to Eugene, while Auzenne will compete at the NCAA Championships in the 100-meter hurdles.

Auzenne, Glenn, Smith and Henderson, the school-record holders in the 4x100, raced to a 43.36 time in the event, placing second overall and winning the second heat. Auzenne went on to qualify in the 100 hurdles for the second-straight year following a 10th-place finish (13.08).

Meanwhile, the Scarlet and Black yielded a pair of qualifiers in the 200. Henderson’s 22.35 time ranked fourth, while Glenn narrowly made the cut-off, clocking in at 22.98 to finish 11th. This season marks the first time she has qualified to the NCAA Championships as an individual.

“My team is phenomenal,” Glenn said. “How competitive and encouraging we are with each other is a blessing. I trained hard, working out several times a week and increasing my weight training. It’s gratifying to see the results.”

Said Burrell, “All season, Simone has stepped up for the team. I’m especially happy for her to qualify in an individual event and I believe that she has a lot more in her this season.”

In the 4x400-meter relay, senior Tyra Lea, sophomore Lisa-Anne Barrow, Knight and junior Monique McPherson recorded a 3:36.27 time, taking 14th and falling just 0.68 out of a qualifying position. That time was still good enough for the 10th on the program’s all-time list.

Women’s 200 Meters Quarterfinals (out of 24 entrants)

Women’s Triple Jump First Round (out of 47 entrants)

Women’s Shot Put First Round (out of 47 entrants)