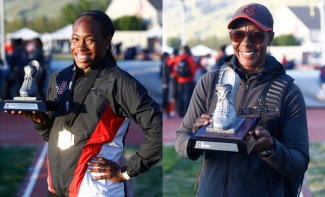 May 15, 2017 (San Diego) - San Diego State track and field landed 12 student-athletes on the All-Mountain West team, the league office announced Monday. The selections were awarded to the top-three finishers in each event at the conference meet, which SDSU won this past weekend.

The 12 all-MW selections helped the Scarlet and Black win its third outdoor conference crown in five years and its fourth overall.

Auzenne snagged a trio of medals as a member of the 4x100-relay team, winning her third-straight 100-meter hurdles conference crown with the program’s third-fastest mark (12.97), and snatching bronze in the 100-meter dash (11.46) to sit fifth in the program’s all-time ranks.

San Diego State will next compete at the NCAA West Regional Preliminary Round in Austin, Texas, from May 25-27.