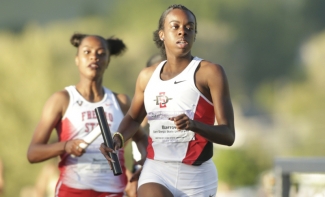 The NCAA West Regional Preliminary Round is in Austin, Texas and runs from May 25-27

May 18, 2017 (San Diego) - San Diego State track and field has qualified 13 student-athletes for the NCAA Track & Field Preliminary Rounds, the NCAA announced Thursday. The 13 qualifiers is tied for the most in program history since the NCAA implemented the region system (east and west) in 2010.

The top 48 student-athletes in each individual event and the top 24 relay teams are selected to compete in the preliminary rounds, held May 25-7 in Austin, Texas (west region) and Lexington, Ky. (east region).

In the west region, Henderson is ranked fourth in the 100 (11.08w), seventh in the 200 (22.61w) and anchors the 4x100 (43.11w). All three times were recorded at last weekend’s Mountain West Outdoor Track & Field Championships. At the conference meet, she was named the MW Women’s Outdoor Track & Field Performer of the Meet after winning those three events.

Winning her third-straight Mountain West 100 hurdles title last weekend, Auzenne checks in at ninth in that event with a wind-aided time of 12.99 and is ranked 14th in the 100 with an 11.36 wind-aided mark. She also leads off the 4x100.

The Scarlet and Black will send two pole vaulters to the preliminary round, led by junior Bonnie Draxler, seeded eighth for the second-straight season (14-03.25), and sophomore Marissa Berry at No. 18 (13-08.25).

Also qualifying for the NCAA West Prelims are sophomores Je’Neal Ainsworth in the triple jump (45th, 40-08.75) and Sierra Brabham-Lawrence in the 100 hurdles (24th, 13.33w). Senior Tyra Lea and junior Monique McPherson will compete for the Aztecs in the 4x400-meter relay.