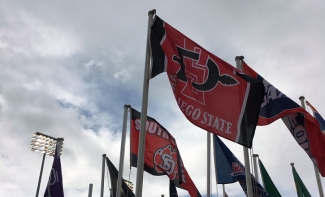 4x100 takes fourth, while Henderson comes in sixth in 100

The 4x100 of Micha Auzenne, Simone Glenn, Rochene Smith and Henderson raced to a fourth-place time of 43.32 seconds. The time was 0.44 seconds faster than their time in the semifinals on Thursday (43.76) and 0.36 seconds faster than last year’s championship final (43.68), when they came in sixth. The fourth-place showing was good enough for five points for SDSU.

Just 50 minutes after the 4x100, Henderson took sixth in the 100 in 11.19. Henderson, who was the runner-up finisher last year, got San Diego State an additional three points.

The Aztecs’ eight points were tied with Akron, Eastern Michigan, Louisville, New Mexico and Northern Arizona for 32nd, just two points out of what would’ve been an eight-way tie for 21st. SDSU was looking for its fifth top-25 finish in six years at the outdoor meet.

San Diego State could have athletes complete at the U.S. Outdoor Championships, which take place from June 22-25 at Sacramento State’s Hornet Stadium. Henderson has earned the “A” standard in the 100 and 200, while Glenn has posted an “A” time in the 200, and Auzenne has an “A” mark in the 100 hurdles. Accepted entries to the U.S. Outdoor Championships will be announced in the coming days.