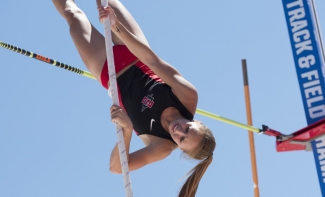 May 25, 2017 (Austin, Tex.) - San Diego State track and field junior Bonnie Draxler became the first Aztec this season to punch a ticket to the NCAA Outdoor Track and Field Championships, highlighting a strong day for the Scarlet and Black at the opening day of the NCAA Outdoor Track and Field Championship west region preliminary round, hosted by the University of Texas, Thursday.

Draxler vaulted over 14 feet for the third time in her career, recording a mark of 14-01.25 to take sixth. The Wrightstown, Wis., native advances to the national meet for the second time in as many seasons. Last year, Draxler tied for 23rd with a 13-foot, 0.25-inch mark at the NCAA Championships. Also competing at the West Prelims was sophomore Marissa Berry, who vaulted for 12-11.50 to place 32nd.

In the 100 meters, all four Aztecs who earned a spot at the NCAA West Prelims will appear in the quarterfinal of the event tomorrow at 6 p.m. CT. Junior Ashley Henderson won the fifth heat with a wind-aided 11.08 time, placing seventh overall. Classmate Simone Glenn was third in Heat No. 3 and 17th overall, crossing the finish line in a wind-aided 11.30. Senior Micha Auzenne was the fastest non-automatic qualifier, placing 19th after racing to an 11.35 wind-aided time. Junior Rochene Smith clocked in at a wind-aided 11.38 for 22nd. During the six 100-meter heats, the wind measured between 3.7 and 5.2 meters per second.

The 400 hurdles saw freshman Andrenette Knight also secure a position in tomorrow’s quarterfinal, set for 7 p.m. CT. She raced to the eighth-fastest time, and the second-best time in the fourth heat, at 58.66.

Women’s 400-Meter Hurdles First Round (out of 40 entrants)