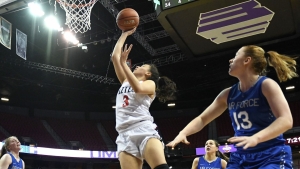 “It was a defensive battle,” head coach Stacie Terry said after the game. “I thought both teams came out and really defended well tonight and made it really hard to score. I'm really proud of our kids for coming in and gutting out this really tough win.”

Mallory Adams scored a team-high 20 points, tying her career high, and led the team with nine rebounds. Sophia Ramos had 14 points while Naje Murray put up 11 points, and the two tied for the team high on assists (3).

The Falcons had four players in double digits, led by Riley Snyder, Hanna Jones and Kaelin Immel (12), while Emily Conroe put up a double-double with 10 points and 10 rebounds. Jones and Brianna Autrey led the Falcons in assists with five apiece, and Autrey had four steals.

Air Force got off to a hot start in the first quarter, jumping to a 10-4 lead within the first two and a half minutes after making their first four shots. The Falcons cooled off soon after as the Aztecs gained their first lead of the game with a three-pointer by Sophia Ramos, bringing the score to 17-16 with three minutes left in the quarter. The Aztecs held the lead for the remainder of the game. San Diego State closed the first quarter with 62.5 percent field goal shooting and held Air Force to 8-17 in field goals (.471).

The Aztecs and Falcons went back-and-forth on scoring throughout the second quarter, but it was Mallory Adams who got hot late to extend the team’s lead to seven with an and-one. SDSU maintained an edge in shooting as they approached halftime, going 18-for-33 (.545) and three-for-six in free throws, against Air Force’s 13-30 (.433) with six of eight on free throws. Nine of the Aztecs’ first half points came off of Air Force turnovers.

The Aztecs showed defensive prowess entering the third quarter, holding the Falcons scoreless in the first two and a half minutes of the quarter with the Scarlet and Black extending their longest run to 12-0. San Diego State earned a 15-point lead, its largest of the game, before the Falcons’ defense stepped up to hold the Aztecs scoreless for just over four minutes. During that span, Air Force warmed up on offense and responded with a 12-0 run of their own before Mallory Adams put up a free throw with under a minute left in the quarter to tally her point total to 20, tying her career high.

Defense was strong on both ends of the floor for the first half of the fourth quarter, as both teams remained scoreless until Air Force’s Haley Jones knocked down a free throw with 4:23 to play following a foul by Sophia Ramos. Ramos responded soon after with a bucket to break San Diego State’s scoring drought.

The seventh-seeded Aztecs will play second-seeded New Mexico in Monday’s third of four quarterfinal games, set for 6 p.m. The game will air on the Mountain West Network. Should San Diego State win in Monday’s quarterfinal, the Aztecs would play in the second semifinal game on Tuesday evening, which is scheduled for 8:30 p.m.

“I'm excited,” Coach Terry said about playing New Mexico tomorrow. “We've played New Mexico close both times, even at the Pit. They want to push the ball. They want to play at a fast pace, and that's what I think we're at our best, too. I think our kids are confident and ready. If we can just manage those highs and lows, I think we can give ourselves a really good shot to win tomorrow.”