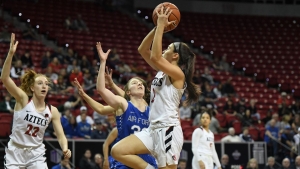 March 11, 2019 (Las Vegas) - Sophomore guard Najé Murray tallied 22 points with six three-pointers and freshman guard Mallory Adams recorded a career-high 16 rebounds in San Diego State’s 70-61 overtime win over second-seeded New Mexico in Monday’s Mountain West quarterfinal. The Aztecs came back from a 13-point deficit and tied the score with a Sophia Ramos’ runner at the end of regulation to push the game into extra minutes.

Ramos had 20 points in the game, and she and Murray tied for a team-high five assists each. Murray’s six threes brought her season total to 79, surpassing the SDSU single-season record of 77 by both Jamey Cox (2003) and Courtney Clements (2013). Junior forward Baylee Vanderdoes had 14 total rebounds, earning a new season and career high. Sophomore guard Téa Adams was also in double digits with 18 points and five boards. Mallory Adams’ 16 rebounds surpassed the current mark for most rebounds ever by a freshman in the MW Women’s Basketball Championship.

“It’s the time of the year where it’s will over anything else,” Murray said. “We know them like the back of [our] hand and they don’t know us in the same way. It was grit. It was effort. It was making plays at the end, and then we made plays top to bottom. Everyone who stepped on our court for us made a play at the right time, and I think that’s what matters at this time of the year and this time of the game.”

San Diego State became the third consecutive seventh-seeded team to knock off the No. 2 seed and advance to the semifinals in the Mountain West tournament, and this was the second straight year the No. 2 vs. No. 7 game has gone into overtime.

The Lobos had three players in double digits, led by MW Player of the Year Jaisa Nunn’s 24 points and 19 rebounds. Jaedyn De La Cerda had 16 points while Jayla Everett added 10 for the Lobos. Nike McClure came in second in rebounding for New Mexico with 11.

Murray started the game hot from beyond the arc, nailing back-to-back three pointers and scoring eight of the Aztecs’ 12 first-quarter points. The team combined for a total of 11 rebounds in the first 10 minutes of play, while Ramos and Téa Adams had two assists apiece. The Lobos shot 4-13 from the field and made five of six from the charity stripe.

New Mexico jumped out early with strong defense in the second quarter but it was Murray’s clutch three-point shooting that brought the Aztecs back from deficits two different times in the quarter to tie it up with the Lobos, but the Lobos made three buckets in the last two and a half minutes to enter halftime with a six-point advantage over the Aztecs.

The Lobos came out from halftime with an undeniable defensive presence and made nine points in the first three minutes of the third quarter, running up a 13-point lead, their largest of the game. The Aztecs found their way back slowly through the remainder of the quarter and with a late layup by Vanderdoes, cut the New Mexico lead to seven.

Ramos put up a bucket in the paint at the start of the fourth quarter, but UNM’s Jaisa Nunn answered with two layups and a free throw to put the Lobos ahead by 10. Murray put up her fifth three of the game with 7:17 left in regulation to break the single-season record for three-point field goals made, and Ramos nailed three treys of her own, the latter of the bunch to tie the score at 55 heading into the final two minutes of the quarter. After New Mexico’s De la Cerda nailed a jumper with 50 seconds remaining, Ramos was fouled and sunk both of her free throws to tie the game at 59-all and send the contest into overtime.

The Aztecs were on fire in extra minutes, going on a 10-0 run over three and a half minutes. San Diego State continued to defend hard in the final stretch, allowing just one bucket by UNM’s Nunn in the five extra minutes.

“A really fun game to be a part of and coach in, and really proud of our young ladies for executing what we’ve been working so hard on down the stretch,” head coach Stacie Terry said.

The Aztecs outrebounded the Lobos 59-44 and hauled in 25 offensive rebounds. Their 59 rebounds were a Mountain West Tournament record. SDSU also set a new tournament record for made three-pointers (9).